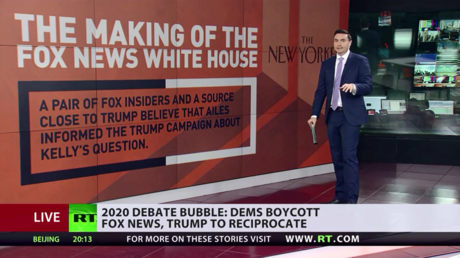 Perez’s blacklisting of Fox News triggered accusations of hypocrisy from conservatives. After all, former CNN commentator and DNC Vice Chair Donna Brazile resigned from her position in 2016, after she slipped questions to Hillary Clinton ahead of a CNN debate.

“You know how many members of the Obama administration are now staffing positions at CNN and MSNBC and CBS and ABC?” conservative commentator Steve Malzberg told RT. “The whole thing is just obscene and ridiculous.”

“They’re not fair and balanced,” Malzberg continued. “This is just more dementia…Trump Derangement Syndrome, whatever you want to call it. They hate Trump so much…and they were just looking for some excuse to pull off Fox News.”

Perez’s decision also angered President Trump himself, who suggested he may do the same with “the fake news networks” at the 2020 election debates. Accusations of bias have flowed from both sides, with the Democrats calling Fox news a “propaganda machine” for Trump, and Trump accusing the liberal media of “hatred and extreme bias.”