Rep. Steve Cohen, a Tennessee Democrat, told a gathering that he hoped Donald Trump – the “big orange president” – would tell GOP senate hopeful Marsha Blackburn to jump off a bridge, expressing confidence that she would comply.

Speaking at a community prayer breakfast in Memphis hosted by the senate campaign of former Governor Phil Bredesen – a Democrat running against Blackburn – Cohen described Bredesen’s GOP opponent as an obedient disciple of the US president. 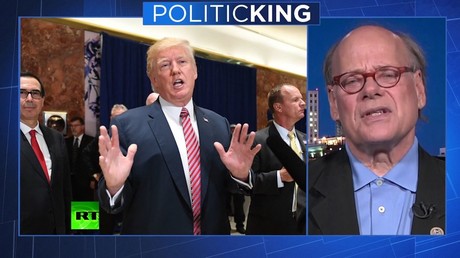 “The big orange president – that’s not somebody from Knoxville – he’s going to come down here and he is going to endorse Marsha Blackburn, because Marsha Blackburn, if he says, ‘Jump off the Harahan Bridge,’ she’ll jump off the Harahan Bridge,” Cohen said in a short audio clip obtained by HuffPost, referring to a bridge that crosses the Mississippi River. “I wish he’d say that.”

The audience, apparently amused, responded to Cohen’s quip with laughter. In a phone interview with the Huffington Post on Thursday night, Cohen insisted that his comment was made in jest.

“It was obviously humor. I wish her no harm. I hope she doesn’t get the Senate. And I wish she wasn’t a lackey for Trump. But I don’t wish her physical harm,” he said.

Cohen is known for his provocative outbursts – especially when Trump is the topic of discussion. After the US president said he “believed” Vladimir Putin “means it” when he said during their Helsinki summit that Russia did not interfere in the 2016 elections, Cohen tweeted out: “Where are our military folks? The Commander in Chief is in the hands of our enemy!”

In a follow-up Tweet, Cohen said accusations that he was calling for a military coup were unfounded.

“No coup called for. I seriously doubt anyone would use twitter to do .. one tweet if by land two if by sea…Wow,” he wrote.