Democratic House Minority Leader Nancy Pelosi (D-California) has attacked the recent arrests of hundreds of illegal immigrants. While half of those detained have criminal records, Pelosi called them law-abiding and patriotic.

In an apparent bid to justify Oakland Mayor Libby Schaaf’s (D) public tip to immigrants about this week’s raids by the US Immigration and Customs Enforcement (ICE) on the San Francisco Bay Area, Pelosi accused President Donald Trump of “terrorizing” migrants.

The sweep, which began on Sunday, netted 232 suspected illegal immigrants, but ICE Deputy Director Thomas Homan said potentially hundreds of additional “illegal aliens…were able to elude us, thanks to the mayor’s irresponsible decision.” 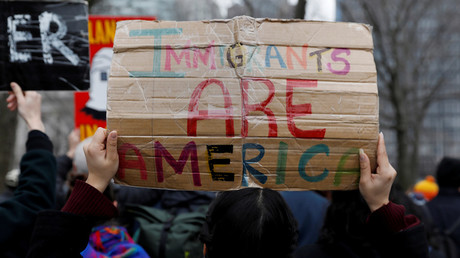 On Thursday, White House spokeswoman Sarah Huckabee Sanders said the Department of Justice had launched a “review” of Schaaf’s actions, accusing her of putting lCE officials at risk.

“I think it’s outrageous that a mayor would circumvent federal authorities and certainly put them in danger by making a move such as that,” Huckabee Sanders said.

In an official statement on Wednesday, which was largely ignored by the mainstream media, Pelosi accused the White House of ordering the raids to “terrorize” immigrants. She called the raids “a shocking abuse of law enforcement power” to “indiscriminately detain scores of hard-working, law-abiding immigrants.”

However, about half those nabbed “have criminal convictions in addition to their immigration violations, including convictions for assault/battery, crimes against children, weapons charges and DUI,” ICE said on Tuesday.

The Trump administration “continues to brazenly target the cities that refuse to bow to its blatantly bigoted anti-immigrant and mass deportation agenda,” Pelosi said, referring to so-called ‘sanctuary cities,’ where police are not ordered to hold illegal immigrants they arrest for misdemeanors until ICE officials arrive. “We will remain open to the patriotic immigrants who are the constant reinvigoration of America,” she said.

Pelosi previously voiced her support for illegal immigration in her eight-hour bid to filibuster the Congressional budget bill on February 7. “I say to their parents: Thank you for bringing these Dreamers to America,” She told the house, referring to those granted temporary work permits under former President Barack Obama’s Deferred Action for Childhood Arrivals (DACA) decree. “We’re in your debt for the courage it took, for you to take the risk, physically, politically, in every way, to do so.”