A new study is sending shockwaves throughout the US solar panel industry over fears of trade protections sought by a fledgling solar panel maker. If the company gets its way, industry researchers warn the US solar industry could be in for a bumpy ride.

GTM Research of Greentech Media predicts that US demand for solar could drop by two-thirds over the next five years. This new trade case aspires to boost the domestic panel manufacturing industry, but will likely have the opposite effect, according to the study, Reuters reported Monday. 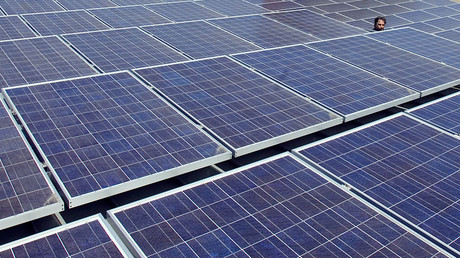 Solar panel manufacturer Suniva filed a section 201 petition in April with the US International Trade Commission just nine days after pursuing Chapter 11 bankruptcy protection. It is being seen as an attempt to fight a global glut of panels which has depressed prices and made it harder for producers in America to compete, according to Reuters.

GTM is saying its findings show that more than half of US installations would be hit, and hit the hardest, if Washington approves the remedies sought by the solar panel company. The research company cites the need for large projects to carry costs that are competitive with natural gas-fired plants in order to incite buying.

GTM’s associate director of US solar, Cory Honeyman, said: “This is arguably one of the biggest downside risks for the future of US solar,” Reuters reported.

Suniva was founded in Georgia, but the majority owner since 2015 is a Hong Kong-based company called Shunfeng International Clean Energy. The petition also included another domestic manufacturer, the US division of SolarWorld, which is a German company. Last month, SolarWorld filed for insolvency, according to Reuters.

Suniva is asking for a duty rate of 40 cents per watt on solar cells, and a minimum of 78 cents a watt on modules for the first year. These prices have not been in place since 2012, according to Reuters.

The US ITC will make its decision in September this year, in regard to whether imports are causing harm to domestic producers. If it finds that the industry will face serious injury by November, it will recommend remedies to President Donald Trump.

PV Magazine reports that Trump would then have the final say as to what will happen going forward. Trump could accept what the ITC has to offer or create a completely different plan. In the end, the results may be vastly different than what Suniva is seeking.

Last week during a rally speech in Cedar Rapids, Iowa, Trump said he was ending “the war on our clean beautiful coal” and wanted to bring “all forms of energy” back to the country, including renewable sources.

“We use electric, we use wind, we use solar, we use coal, we use natural gas, we will use nuclear if the right opportunity presents itself,” Trump said. “I don’t want to just hope the wind blows to light up your homes and your factories, as the birds fall to the ground.”

Juergen Stein, president of SolarWorld USA, issued a statement in late April, saying: “The case of Suniva dramatically demonstrates that the US solar manufacturing industry still suffers from unfair trade.”

“SolarWorld – as the largest US crystalline silicon solar manufacturer, with more than 40 years of US manufacturing experience – will assess the case brought by Suniva, but prefers that any action to be taken against unfair trade shall consider all parts of the US solar value chain,” Stein said.

The Solar Energy Industries Trade Association, a US solar trade group, is also opposed to Suniva’s petition, warning that the US industry would lose 88,000 jobs if the trade protections are adopted, according to PV Magazine.