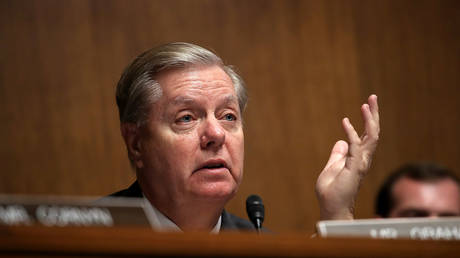 A Democratic super PAC head is facing an online backlash after saying that Sen. Lindsey Graham is being “blackmailed” by Russians over something related to a “serious sexual kink.”

“A Republican just told me that he doubts Lindsey Graham is kowtowing to Trump (and indirectly Putin) because he’s being blackmailed over his sexual orientation (an open secret) or even financial corruption. Rather, he thinks it probably involves some pretty serious sexual kink,” Jon Cooper, the head of the Democratic Coalition Against Trump, tweeted.

A Republican just told me that he doubts @LindseyGrahamSC is kowtowing to Trump (and indirectly Putin) because he’s being blackmailed over his sexual orientation (an open secret) or even financial corruption. Rather, he thinks it probably involves some pretty serious sexual kink.

No further details on the exact nature of the “kink” were provided, letting the minds of the Twitterati run wild.

Lindsey Graham, once a vocal opponent of Trump has apparently mended the relationship with the US President last summer, playing golf and lunching with him.

While Graham still disagrees with Trump on many issues – like the US withdrawal from Syria, his change of heart has been widely seen by Trump’s opponents as a betrayal.


The rant was not met kindly on Twitter, with many deeming Cooper’s attack on Graham to be “homophobic.” While it has been repeatedly suggested that never-married Graham might be gay, the politician has denied this.

Journalist Glenn Greenwald – an openly gay man himself – slammed the comment as a “homophobic gutter,” which is deemed “fine” only since Cooper has the “right political ideology.”

Other users scorned Cooper for extreme lack of taste and demanded some actual facts to support the vague claims against Graham.

I don’t like @LindseyGrahamSC or his politics and I could care less about his sexual orientation. However, I also don’t believe in making all these wild accusations. We need the facts and facts are the only thing on which he should be judged. Otherwise we’re just like them.

This tweet seems far out of the bounds of good taste, even if true.

Just when I think your party has gone as low as it can possibly go, you stun me by pushing it to a whole new level that I didn’t even know existed! Kudos on that. 👍

Some slammed Cooper’s tweet as a thing belonging to the McCarthy era.

You are aware that this exact same logic was the justification used by McCarthyites to purge the federal government of queer people during the Lavender Scare, yes?

This remark reminds me of Senator Joe McCarthy. Bit of a bummer to see Democrats saying this kind of thing. Wish today’s Dems we’re more like the Dems of my youth.

Upon seeing the smearing tweet largely backfiring, Cooper issued a follow-up to say he is “openly gay” himself and has “no issue with Graham’s sex life.”

By the way, as an openly gay man myself, I couldn’t care less about Lindsey Graham’s sex life (gay, straight or otherwise). However, Graham is the Senate Judiciary Chair and there’s a strong likelihood that he’s being blackmailed by the Russians. If so, that needs to be revealed.

While many deemed Cooper’s allegations extremely inappropriate, others have eagerly jumped on the anti-Russian train, making the whole conspiracy theory even wilder.

I’ve often said I think people & history wud forgive these traitors easier if they patriotically admitted their skeletons & exposed what DT/RU were doing to them vs it coming out after they covered it up.

I also wonder if physical threats to them or family have been made.

We guessed as soon as they played that round of golf. Since then he defends Trump. The Russians are dogged in their pursuit of party leaders..both sides. Tapes, selfies, emails & gossip. Trump got the intel, no doubt.

Well, I’m straight and couldn’t give a damn what floats Lindsey Grahams boat, but there’s a lot of people in his SC riding who do. He’s recv’d a ton of cash from Russian oligarchs already so we know there’s deep connections at play that bare investigating. #TrumpRussiaCollusion

Some even managed to do both – criticize Cooper’s “homophobia,” yet support the anti-Graham conspiracy bit.

but who cares about @LindseyGrahamSC‘s sex life? He’s willing to undermine democracy because of his sexual preferences about which NONE of us cares (except maybe the bigoted people of his state)? This whole thing is sick.