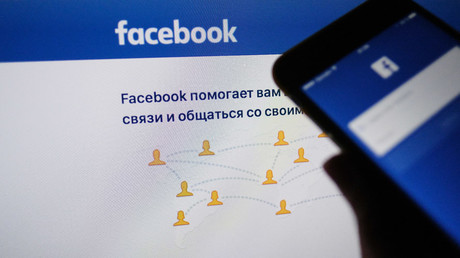 Those who lost the 2016 presidential election to Donald Trump are finding their Russian story falling apart before their eyes, because there was nothing there, and now they are trying this, said Chris Kitze, founder of encrypted internet service Unseen.

Facebook agreed to release to Congress data about ads allegedly bought by Russia, amid an ongoing investigation into Moscow’s purported meddling in the 2016 US election.

The social media giant claims it discovered 3,000 paid political ads that could have links to Russia. They cost a hundred thousand dollars in total, and were bought between 2015 and 2017.

The company said all the purchased advertisements are linked to “inauthentic” accounts.

Kremlin spokesman Dmitry Peskov on Friday denied Moscow have anything to do with political advertisements on Facebook.

“We don’t know who placed the advertisements on Facebook or how, and have never done it. The Russian side has never been part of it,” said Peskov.

RT:  Earlier Facebook refused to publish these ads, posted by user accounts allegedly linked to Russian authorities. What made the company change its position?

Chris Kitze: They are running out of time. They can’t prove anything that Russia did anything bad with the American election. They are obviously trying to put some news out there to try and keep the story alive. It looks to me like it is pretty much nothing.

RT:  Are you suggesting that there is someone specific behind this issue?

CK: What happens with politics in America is that there are certain people behind the scenes who are doing things. They are not accomplishing what they wanted to accomplish. So what they end up doing is that they have to keep trying more and more things. In the case of Facebook, they said: ‘Well, we can dump these things out and make a news headline.’ Everyone will forget about it in a couple days.

RT:  What kind of leverages does the congressional investigation committee have to pressure the Internet giants like Facebook to cooperate?

CK: Facebook is so big they basically do whatever they want anyway. The Congressional hearing can subpoena things, but a lot of these giant companies can just sandbag and hold things back so that they don’t have to provide anything. They will just drag it out so long that it won’t matter. There is a reason why all the stuff is being released right now – and you noticed the coordination of the news media – that is the first tell that shows you this whole thing is a setup.

RT:  Usually the big companies do not immediately agree on such demands of a government, trying to draw public attention to the problem. Why this time it was not the case?

CK: They are contributing to the Russia hysteria. There are two sides to this: there is President Trump and then there are the other people. The other people lost power. They were surprised they lost the election. And now what they are trying to do is get back at President Trump. It’s just that simple. What is happening now – they are finding that the whole Russian story fell apart right in front of their eyes, because there was nothing there, and now they are trying this. It is another bit of nothing. They may try and use this as a way to try and regulate people, like Matt Drudge and other news websites to say: ‘Well, you’re accepting ads potentially from foreign people.’ But there is no way that a news website knows who the advertisers are, because they all are done by add networks, like Google.

The Russia hoax continues, now it’s ads on Facebook. What about the totally biased and dishonest Media coverage in favor of Crooked Hillary?

RT:  The investigation committee has a right to make any company share the materials that might interest them. Why then are they focusing on Russia? Doesn’t it violate privacy rights of the Internet users?

CK: There are things that the Congress can do and judges can do. They have wide powers to subpoena things for criminal investigations. So at that point people pretty much lose their privacy rights – that is just the way it is.

RT:   Judging by what you’ve said, today people almost don’t have a chance for any kind of secrecy, do they?

CK: I am not sure you can hang your hat on that for this matter. People can have privacy, but the real issue here is between Facebook and the advertisers. So it is not really involving the end user – it is more a corporate and a political matter.

RT:  Usually the big companies do not always agree to comply with such demands from the government, trying to draw public attention to the problem. Why is that not the case this time around?

CK: It is interesting to me, as someone who used to be a Facebook user… They push all kinds of other junk, things that most moral people would never want in their homes. Now they are cooperating with the government. The only reason they are doing this is obviously because that is what they want to do – that is in their interest. These are companies who could hide all this stuff and say: ‘We don’t know anything about it,’ or they can drag it out for two years – just looking for the information, or even lose it. There is a reason why these companies all of a sudden are showing up with this information – it is because that is a part of the agenda that is being pushed by the news media complex and the tech complex in the US.

RT:  Remember the case when Apple company did not immediately agree to cooperate with FBI to unlock the terrorist’s cell phone, raising a huge debate over the privacy rights. Should not this case with Facebook ads be raising similar concerns?

CK: They are controlled by the same group of people. There is a group of people – the deep state – here in the US, who are controlling many, many things. They control banking, education, corporate business. They have all the power. They control all the tech companies. Basically, they have perfect information.  It’s all been merged into various data basis, and so forth. They have perfect information about everybody. The only time that they drag stuff like this out is when it serves their interests. That is all it is. It is an unbelievable thing that they are even promoting this. And when you see it promoted in the media, you know that there are lying about something. They are hiding something, and they are pushing for something that is probably not true. You can usually assume it is exactly the opposite of whatever they say on the major news media.