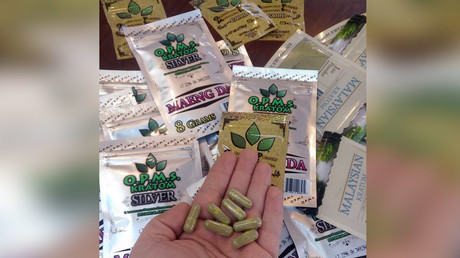 The Drug Enforcement Agency (DEA), currently starring in the new season of the Netflix series “Narcos,” is busy trying to class a relatively innocuous alternative treatment to methadone, kratom, as “Schedule I,” putting it on par with heroin, cocaine, and the most “dangerous” of them all – cannabis.

Citing questionable claims about its potential to cause fatal overdoses, the DEA hopes to list the natural opioid starting October 1, but a petition against the change has more than 110,000 signatures and counting, and points to studies that claim “it has been shown numerous times in reports from users to help recovering Opiate addicts, treat pain, combat depression and anxiety, and much more.”

In Alabama, where Kratom is already banned, addicts had to return to methadone with heroin use and overdoses reported to have increased by nearly 20 percent.

Unlike synthetic methadone, kratom is a natural substance which does little to benefit the big pharmaceutical companies who cannot patent it.

Better idea than banning Kratom: ban the DEA and put the agents in charge of financial crime. They’re very good at following money.

Made from the leaves of Mitragyna speciosa, a Southeast Asian tree related to coffee, kratom activates opioid receptors in the brain and reduces pain, serving as a mild stimulant.

Its legality has attracted the attention of head shops, using it in products including energy shots and tea.

The DEA isn’t looking upon kratom with the same fondness though, announcing its intent to ban it in order to “avoid an imminent hazard to public safety.”

Kratom will sit alongside heroin, LSD, and ecstasy as having “a high potential for abuse, no currently accepted medical use in treatment in the United States, and a lack of accepted safety for use under medical supervision,” according to the DEA.

Because the petition surpassed 100,000 signatures, the White House will have to respond to it, but this is not expected to happen before kratom is newly classified at the end of this month.

It will then remain Schedule I for two years allowing the government to settle on a more permanent classification.

The Huffington Post reported that of the 30 deaths worldwide, other drugs and pre-existing health conditions also played a factor in several cases.

More than 25,000 fatal overdoses occurred in the US in 2014 using prescription drugs, according to the National Institute on Drug Abuse.