New York City Mayor Bill de Blasio has reportedly ordered the NYPD not to arrest people for smoking marijuana in public ahead of outright legalization of the drug in the city. Currently, only medical marijuana is legal in NYC.

The mayor flagged the policy change on social media last week, but city hall aides told the media on Sunday that the order has been given to the NYPD.

I’m announcing today that the NYPD will overhaul its marijuana enforcement policies in the next 30 days. We must end unnecessary arrests and end disparity in enforcement.

The move will form part of a 30-day trial to address the racial disparity in arrests throughout the city designed to “overhaul and reform” drug enforcement policies. In addition, de Blasio will create a task force whose sole purpose is to prepare New York City for legalization in terms of public smoking, zoning regulations for dispensaries and public health campaigns.

De Blasio has long opposed decriminalizing marijuana but recognises that legalization seems inevitable, especially after successes elsewhere in the US. “With marijuana legalization likely to occur in our state in the near future, it is critical our city plans for the public safety, health and financial consequences involved,” the NYC chief said in a statement, as cited by the New York Daily News. 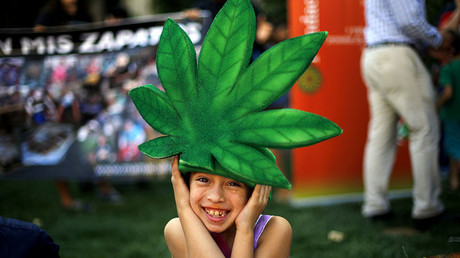 Under the new NYPD directive, those caught smoking marijuana in public will be issued summons to appear in court instead of facing summary arrest. For context, nine states and Washington DC have legalized marijuana for recreational use without the need for a doctor’s letter. Medicinal marijuana is also legal in an additional 29 states.

RT.com has reached out to the mayor’s office and the NYPD for comment.

Research indicates that, since quality-of-life policing initiatives on public smoking of marijuana were introduced in the 1980s, misdemeanor arrests for marijuana have accounted for roughly 15 percent of all adult arrests in the city. However, last week de Blasio said that he feared “giant corporations in the style of the tobacco companies,” abusing potential legalization and “trying to hook as many young people as possible on marijuana.”

De Blasio introduced similar measures early in his first term as city mayor, in which police were directed to issue summonses in cases where people were found in possession of the drug, but those found smoking it in public were still arrested. The move preempts rumored legalization legislation from New York Governor Chris Cuomo, who has also long opposed fully-fledged legalization.

Furthermore, Manhattan District Attorney Cy Vance Jr. and his Brooklyn counterpart Eric Gonzalez announced they would stop prosecuting the majority of marijuana possession and smoking cases, according to the New York Daily News.

While marijuana is still a Schedule I drug under federal law, in 1977, New York decriminalized possession of 25 grams or less of marijuana, making it an infraction, not a crime, punishable with a $100 fine.