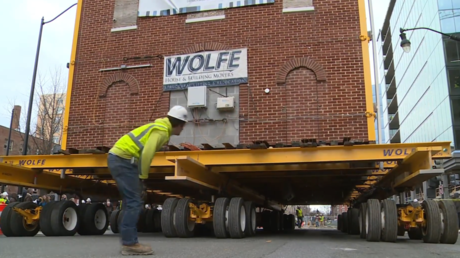 Spectators and residents lined the streets and balconies of Washington DC Wednesday to watch the city’s oldest synagogue be moved one block down the street by a massive, remote-controlled trolley.

The enormous platform with 12 sets of wheels carried the 273 ton, centuries-old building down the street, to its new home where construction of the new Capital Jewish Museum is already underway. The museum is expected to be completed sometime in 2021.

The synagogue was built in 1876, during the administration of President Ulysses S. Grant and once housed the Adas Israel Synagogue, the oldest in the district.

Executive director Kara Blond says the new construction will “embrace the historic building connecting up the old with the new.”

However it’s not the first move of this synagogue, the first of three took place in 1969 to make a way for the underground system and then it was shifted again two years ago during construction of a new neighborhood.

Also on rt.com
Synagogue destroyed by Nazis on Kristallnacht opens in Russia (PHOTOS)


The most recent move was to facilitate the $1.3 billion Capital Crossing project which aims to reconnect downtown DC with Capitol Hill via a massive platform which will be constructed on top of Interstate 395.

The new museum will be a landmark site representing the contributions of American Jews in the nation’s capital and will contain items such as a lace collar worn by Supreme Court Judge Ruth Bader Ginsburg and a banner carried by Jewish lobbyist Hyman Bookbinder  during the 1963 March on Washington.