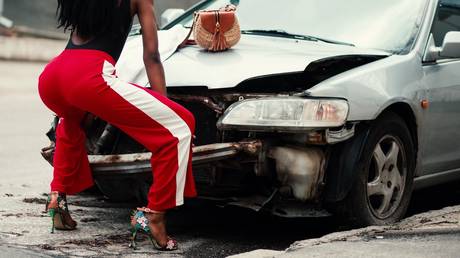 The videos show two girls twerking on the white car’s roof as it drives down the highway. Another girl sticks her head out of the passenger window to capture the moment.

The crazy dance party was filmed by Jackie Friedhoff as the SUV drove westbound along Interstate 64 in St. Louis on Monday.

A second video clip shared by Friedhoff shows the girls climbing back into the SUV through the back window. “Seriously!” our shocked eyewitness can be heard saying.

The footage soon went viral, as people reacted to the bizarre sight with disbelief, amusement and anger. Many criticized the girls for endangering themselves on a busy road. Friedhoff was also criticized for filming the incident when she was driving.

Friedhoff didn’t call the police on the twerkers, but told the New York Post she posted the video on Facebook “in hopes that they would get caught.”


According to the St. Louis police, the dancing girls could have gotten a traffic violation for riding on the exterior of a vehicle, while their in-car camerawoman could be in trouble for not wearing her seat belt.

One of the girls involved reportedly contacted Friedhoff asking her to tag her in the post, but later deleted her account.