Once again the intrepid Peter Dale Scott takes us into that claustrophobic wilderness of mirrors where the criminal underworld meets the establishment upperworld in the sub-rosa labyrinth of the Deep State. Scott is the premier synthesizer unearthing all the various seemingly unconnected strands of hard documentary factual evidence and counterfactual hypothesizing concerning the November 22, 1963, coup d’état. 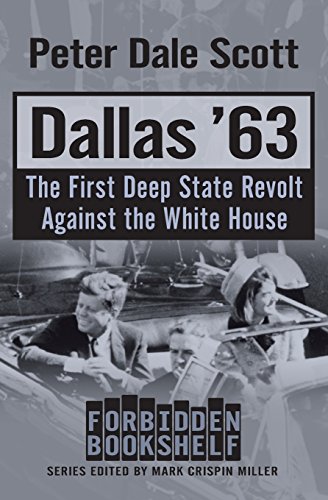 He begins by addressing head-on the seminal question of “Who was Lee Harvey Oswald?” in a brilliantly sketched portrait we have not seen before. The intelligence services (especially the CIA’s chief of counterintelligence James Jesus Angleton – Associate Deputy Director of Operations for Counterintelligence (ADDOCI) suspected a Soviet mole had penetrated the dank bowels of the Deep State and obtained highly secret information concerning the U-2 spy plane. Soon an elaborate multilayered mole hunt began. Abroad, the CIA/State Department “dangled” Oswald as a US Marine radar operator “defector” to the Soviets, while in the US they compiled a byzantine, contradictory and ever-shifting documentary “legend” of manipulated and altered biographical data concerning Oswald as a trap to snare whom among the various interagency intelligence personnel who accessed his files was the possible mole. Upon his return to the US, Oswald continued his counterintelligence role as agent provocateur, informer, and ultimately as “patsy.”

In my personal library I have several thousand books, hundreds relating to the covert and overt background concerning the assassination of President John Fitzgerald Kennedy. From every…