Crude oil could begin flowing through the controversial Dakota Access Pipeline next month, according to a filing pending with the Federal Energy Regulatory Commission. 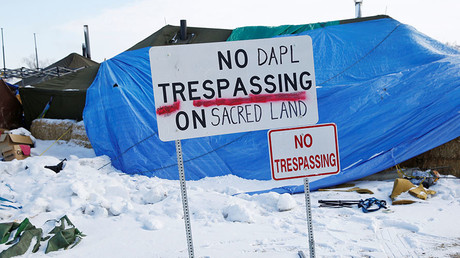 The two tribes filed multiple lawsuits against Energy Transfer Partners to stop construction of the pipeline, arguing the land belonged to them and that the pipeline would desecrate sacred burial grounds around Lake Oahe. Many also argued that an oil spill would poison the tribe’s primary water supply.

At its peak, thousands of protesters, known as “water protectors,” set up a camp outside the construction site. Protesters lived at the camp site for months where hundreds were arrested. Other protests also erupted across the nation, from Washington, DC to Los Angeles.

In December, hundreds of Army veterans showed up to support the protesters before former President Barack Obama halted construction of the pipeline, citing that further environmental impact studies needed to be conducted.

Then, shortly after winning the 2016 election, President Donald Trump ordered the construction to resume in January.

In February, the US Army Corps of Engineers announced it would grant the final permit for the Dakota Access Pipeline and cancel any further environmental studies.

In March, court filings revealed that Energy Transfer Partners began pumping oil into the pipeline underneath the Missouri River reservoir in North Dakota.