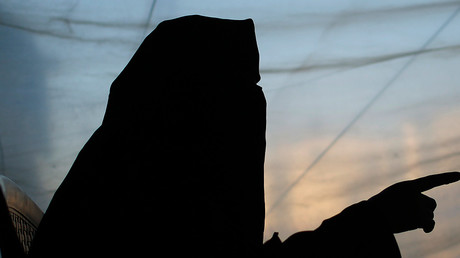 Controversial Mail on Sunday columnist Peter Hitchens has sparked a social media firestorm after comparing “squawking” women who have spoken out in the Westminster sex scandal to militant Islamists.

The column, headlined ‘What will women gain from all this squawking about sex pests? A niqab,’ has enraged Twitter, with users calling the controversial writer “quite mad.”

Peter Hitchens is really quite mad isn’t he. I mean, like, really really.

To begin his nearly 900-word rant, Hitchens starts out by appealing to what he appears to believe is womankind’s most basic motivator: fashion.

“The black, I think, is flattering and it radiates an air of cool unapproachability,” Hitchens wrote, conjuring the mental image of the full-length veil.

“No Minister would put his hand on the knee of anyone dressed like this; indeed, he’d have trouble finding her knee, or anything else.”

Hitchens then goes on to sarcastically ponder if this is what we truly want – Islam’s “severe dresscodes and sexual segregation” – in order to prevent any man from laying his unwanted hand on a woman’s leg.

“Wise men at Westminster will in future go about with chaperones, record and film all conversations with the opposite sex, require women to sign consent forms before meeting them, and certificates of good conduct afterwards,” Hitchens suggests.

“Nothing else will keep them safe from claims that they momentarily applied ‘a fleeting hand’ to someone’s knee.”

Hitchens was quick to defend himself online, challenging his naysayers to lay their disagreements out on the table or continue “running with the mob.”

The piece comes only a day after an article by Charles Moore of the Telegraph attracted similar ire for stating that the Westminster sex scandal is in fact “about power: Theresa May’s lack of it, and women’s rapid gain.”

In the last week, Hitchens has claimed the female gender is one step closer to overthrowing mankind. The outspoken columnist wrote that the female gender’s “fiercer objective” is to overthrow the enemy, the patriarchy, yet it is that war that is distracting us from the real major issues of today.

Yet some parts of his argument were praised. Hitchens asks why we are busy making a hullabaloo about lewd comments and touched legs when we’re in the midst of the “biggest constitutional crisis for a century, and wobbling on the precipice of bankruptcy.”

The welfare system is on the brink of meltdown, he warns. The army is also down to a skeleton and the navy is dead.

Michael Fallon, who the columnist labels “one of the worst Defence Secretaries in history,” resigned last week, not for his failings as defence secretary, Hitchens laments, but for trying to kiss journalist Jane Merrick when she was a junior political reporter (among other things).

Despite his musings about the state of the government, the feminist movement’s true motivations, or listing over the top ways women can avoid the sexual advances of men, Twitter users have made their stance clear: the sex scandals rocking Westminster, Hollywood, and the rest of the world must lead to real change. Women simply want to go about their day without being raped, harassed, assaulted, or pestered.

This is laughable for grownup men who know how to act normally at lunch. If you feel like this stay home no one wants your weird company https://t.co/tVAuadwtA9