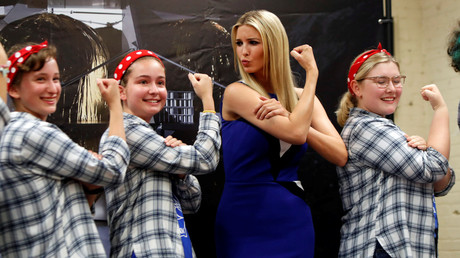 The Daily Beast was blamed for using Ivanka Trump’s name to lure readers into reading their ‘exposé’ of the weirder aspects of the Transcendental Meditation (TM) movement. The daughter of the US president barely figures in it.

TM started as a mantra meditation technique taught by guru Maharishi Mahesh Yogi and has turned into a world-wide movement since the 1950s. Millions of people use it to deal with anxiety. Some believe there is more to it, and that by practicing they can learn how to meditate or even reduce violence on a global scale. Some are wealthy and powerful people, who can and do spend lavish sums of money on the hobby.

The Beast report delves into the apparently less-seemly aspects of the TM movement with a headline that reads: “Ivanka Trump’s Gurus Say Their Techniques Can End War and Make You Fly”. What does the daughter of the US president or her husband Jared have to do with the article? Not much, it seems. Ivanka wrote in a book how the technique helps her be more productive. Jared was introduced to it by Bob Roth, a leading promoter of TM – as were many other US celebrities.

The website’s apparent attempt to boost the audience of the report by puffing it up for readers interested in learning bad things about the Trump family didn’t go unnoticed.

As much as I dislike Ivanka and Jared, it’s a bit of a stretch to connect them to the crazier stuff in your report. If they just believe in the meditative aspects of TM, it seems more like another spiritual celebrity fad. A little kooky maybe, but not necessarily harmful.

This article – which tries to demonize ancient practices and basic principles of meditation as deranged and maniacal all because Ivanka Trump does it – is far more deranged than the practices and beliefs it attempts to malign: https://t.co/HmjHOCCO77

@JustinRohrlich Re:Mind Games. You bet – using Ivanka and Jared’s names to get people to read an article about TM that had little to do with them. [And, I don’t like them at all.]. Clickbait at it’s best.