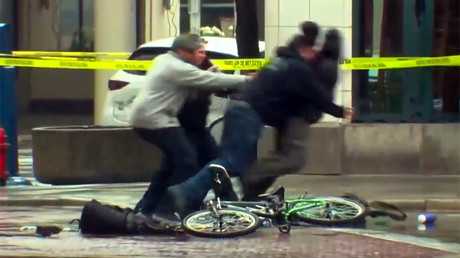 When a suspicious backpack was found in Milwaukee, an impatient cyclist decided to take matters into his own hands and investigate. However, his amateur detective moves ended in a tackle and an arrest.

A bomb squad arrived at the scene of the backpack, using a string to place it in a cordoned-off location before slowly backing away. It was normal safety protocol, but the cyclist was anything but impressed.
He decided to “diffuse the situation” himself, the man who called in the suspicious bag, Robert Harris, told local NBC affiliate TMJ-4.

That involved breezing past police tape and opening the bag, throwing its contents onto the wet pavement before slamming the bag on the ground and dramatically throwing his arms up in the air.

“I thought for a moment there, he was going to get blown up,” Harris said. “Some water bottles came out and they were aluminum or stainless steel. You don’t know they were just water bottles. It could have been a bomb device there.”

The cyclist’s efforts didn’t land him a metal of bravery or a pat on the back. Instead, it landed him a football style tackle by three officers who ultimately arrested him. There’s been no word from the man himself, but it’s a safe bet that he’ll keep cycling past the next police investigation he stumbles upon.