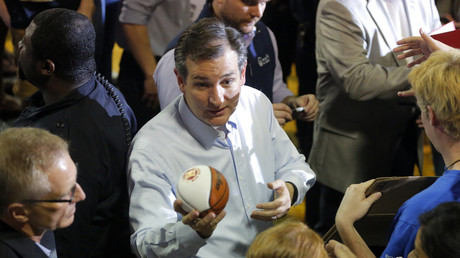 The bizarre basketball game between Texas Senator Ted Cruz and Jimmy Kimmel is fast approaching, and the smack-talk is heating up.

The former Republican presidential candidate and the late night talk show host will face off at Texas Southern University for a game of one-on-one, in what has been dubbed ‘The Blobfish Classic.’ The game’s name was inspired by an insult Kimmel had levied at Cruz, which sparked the idea for the game.

In the lead-up to the game, each side has been taunting the other on social media. Cruz has posted a number of videos highlighting his skills, including one post set to the Chariots of Fire soundtrack.

Kimmel has also been teasing Cruz on his show. “This will be Ted Cruz’s second most embarrassing loss to a TV host in recent memory,” he said on Monday. “If there’s anyone you want to have a beef with, it’s Ted Cruz. Because this is a guy who, during the election, Donald Trump insinuated that his wife was ugly and his dad helped kill JFK. So what did Ted do to retaliate? He endorsed Donald Trump for president.”

Cruz told reporters he would go as far as to “pull [Kimmel’s] shorts to the ground” to prevent Kimmel from dunking a basket. Kimmel has also consulted with a marine biologist to learn more about blobfish.

.@jimmykimmel All right, Big Guy…you talk a good game. You besmirched my support for the @HoustonRockets 🤨 So let’s settle this man-to-man: one-on-one, hoops (or “ring-ball,” if you prefer). The loser gives $5k to the (non-political) charity of the winner’s choice. https://t.co/BWvAP5VOtM

Cruz first challenged Kimmel to the game during the NBA playoffs in May. The pair have each pledged $5,000 to local charities.

It’s not just about sports and charity, however. Kimmel is preparing to drill Cruz on policy whilst on the court.

Cruz, who was on his high school’s varsity basketball team, is the bookies’ favorite to win.