The Trump administration has held the biggest lease sale of oil and gas in US history. Environmentalists fear the auction will massively expand fossil fuel production and could lead to the next Deepwater disaster.

President Donald Trump on Wednesday sold more than 77 million acres of federal waters in the Gulf of Mexico for offshore oil drilling, an area twice the size of Florida. The lease sale forms part of the Trump administration’s plans to increase domestic energy production by opening up new areas for oil drilling.

Oil drilling in the Gulf of Mexico became increasingly controversial after the BP Deepwater Horizon disaster in 2010, which killed 11 workers and released millions of barrels of crude oil into the Gulf of Mexico. The catastrophe caused  $17.2 billion-worth of damage to natural resources, according to a study in 2017 commissioned by the US National Oceanic and Atmospheric Administration. 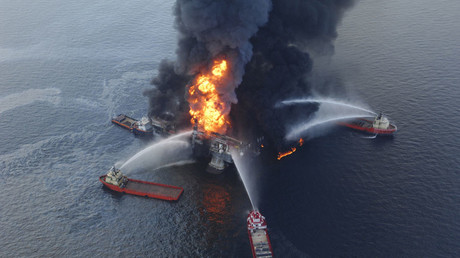 Critics of the sale fear the expansion in offshore drilling could devastate marine life and lead to roll-backs in environmental protections. “Trump is selling off our oceans and selling out coastal communities and marine life to the oil industry,” said Kristen Monsell, oceans program legal director at the Center for Biological Diversity.

“More drilling and less regulation will make the next Deepwater Horizon disaster only a matter of time. Whales, dolphins and Gulf seafood are already marinating in oil spills and industry wastewater,” she added.

“People need jobs, the Gulf Coast states need revenue, and Americans do not want to be dependent on foreign oil.” he said.

The Gulf of Mexico provides the US with around 1.5 million barrels of oil per day, or roughly 17 percent of its national production total, according to the Energy Information Administration. US  crude oil output has grown by more than 20 percent since mid-2016.

The oil industry welcomed the lease sale, with Randall Luthi of the trade group National Oceanic Industry Association noting that the sale on Wednesday “may draw more interest from industry than we have seen in recent years.”

Meanwhile some NGOs have questioned the economic rationale behind the sale, arguing that the way in which federal assets are sold off does not serve the best interests of US taxpayers. The Project on Government Oversight warned in February that the ‘uncompetitive’ lease system used by the government to auction sites allows energy companies to “secure offshore leases for a pittance.” It cautioned that the sale in the Gulf of Mexico means “more publicly owned resources could be turned over to industry at bargain-basement prices.”

The Center for American Progress, a left-leaning policy think tank has echoed this statement, saying in a statement that “offering a nearly unrestricted supply in a low demand market with a cut rate royalty and almost no competition is bad policy and an inexcusable waste of taxpayer resources.“