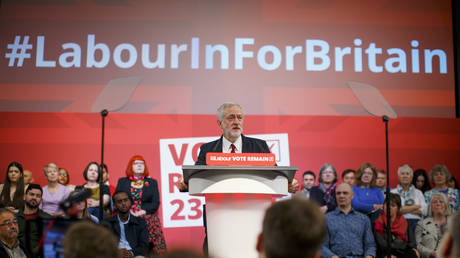 Jeremy Corbyn’s Labour Party has revealed they are pushing for PM Theresa May’s government to back their deal and allow MPs the option to vote for a second EU referendum, with their amendment to the Brexit deal.

Some backers of a second referendum have interpreted this move by Labour as evidence of the party fully committing to holding a ‘people’s vote’ – it’s not as simplistic as that.

Corbyn’s amendment, tabled on Monday night, makes clear that they are seeking to give MPs the option of voting on holding a second EU referendum, if a Brexit deal can secure the support of the majority of Parliament.

That deal is predicated on:

1. securing a permanent customs union with the EU;
2. a “strong relationship” with the single market;
3. “dynamic alignment” on workers’ rights.

The party wants to avoid a no-deal Brexit.

During May’s statement in parliament on Monday, where she was expected to lay out her Brexit ‘plan B,’ but instead reaffirmed her eagerness to continue working on her ‘plan A’ by pushing for EU concessions on the Irish backstop, the PM refused to rule out no-deal.

On the face of it, Labour’s amendment would appear attractive to Tory Remainers who have publicly backed a second referendum. However, ITV’s political correspondent, Paul Brand, has tweeted that a number of pro-EU Tories have ruled out backing it, and instead will support other backbench amendments, which they see as better options to avoid a no-deal Brexit.

LATEST: Soubry, Allen, Wollaston won’t back Labour amendment. So that’s that then.

Labour’s Yvette Cooper amendment is getting much cross-party support. It essentially seeks to rule out a no-deal scenario, giving PM Theresa May until February 26 to get her Brexit deal through Parliament.

If she fails to do so, then Cooper’s amendment states that MPs must be able to vote on extending Article 50 to allow for further negotiations with EU officials. The UK is scheduled to leave the EU on March 29.

It comes as European commission spokesperson, Margaritis Schinas claims the UK government are still to communicate what changes they require to the EU Withdrawal Agreement, signed off in December.

READ MORE: Theresa May warned of mass resignations if she blocks vote to stop no-deal Brexit

Schinas said: “We urge the UK to clarify its intentions as soon as possible. At this stage we have nothing new to say from Brussels because there is nothing new from London.”

MPs will debate May’s ‘plan B’ from January 29. No date has been set for the vote on the PM’s alternative deal.