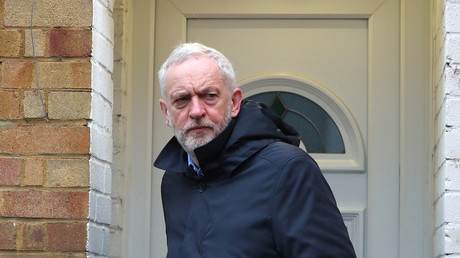 Jeremy Corbyn has condemned Prime Minister Theresa May’s “rolling of a red carpet” for US President Donald Trump at a time when his “dangerous and inhumane policies” are undermining the “lives of millions of people.”

Speaking as thousands of people prepare to protest against Trump’s visit to the UK in dozens of organized demonstrations across the country, the Labour party leader hit out at the Tory government for offering Trump an unhampered welcome. May and her husband Philip were seen welcoming the president on a red carpet on Thursday night as he arrived with his wife Melania at Blenheim Palace.

Trump landed at Stansted Airport on Thursday for his four-day visit to the UK, during which he will meet the PM at her country residence at Chequers, as well as the Queen at Windsor Castle.

In a video posted on his Twitter page on Friday morning, the opposition leader said: “Theresa May has invited President Trump to our country at a time when his dangerous and inhumane policies are putting the lives and wellbeing of millions of people at risk.”

Corbyn added: “The Labour party is committed to dialogue, including of course with those we strongly disagree with and in government we would find a way to work with his administration while also standing up for our values and our beliefs.

“But instead the Tories are rewarding President Trump with a red carpet welcome.”

The Labour leader cited Trump’s recent ‘zero tolerance’ immigration policy that saw children being separated from their parents at the southern US border. Amid international outcry over the policy, Trump signed an executive order to stop it.

Corbyn said May has greeted the business tycoon-turned president while he “repeatedly tramples on the most basic fundamentals human rights that all of us hold dear […] condoning racism, misogyny and prejudice, and promoting the politics of hate and fear.”