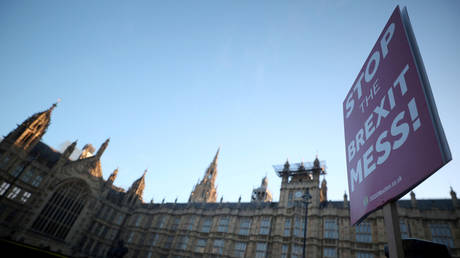 Labour leader Jeremy Corbyn has written a letter to UK Prime Minister Theresa May to outline five legally binding changes she must make to her Brexit deal, if she is to secure the backing of his party.

In his letter to the PM, Corbyn argued that the EU have been very clear on the importance of the Irish backstop and that any attempt to seek modifications on this issue is not a “credible or significant response,” suggesting such changes would not get her Brexit deal through the UK’s parliament.


The Labour leader called on May to rework the political declaration contained within the agreement with the EU, which sets out the framework for the UK’s future relationship with the EU, including the commitment to a customs union.

His intervention has sparked a backlash from pro-EU Labour MPs, who have long advocated a second referendum and who have in recent weeks been stepping up pressure on Corbyn and his shadow cabinet to make it official party policy.

Labour MP for Nottingham East, Chris Leslie, has taken to social media claiming his party’s Brexit policy, agreed at conference, was in the bin and accused Corbyn of enabling a Tory Brexit. Centrist Labour MP Chuka Umunna, who has supported the official ‘people’s vote’ campaign tweeted: “This is not Opposition.”

It’s not just Labour’s conference policy in the bin 🗑

When the jobs go & revenues for services dry up as a result – Labour’s leadership will have ZERO right to complain: they share responsibilityhttps://t.co/vbBEGyOKhO

This is not Opposition, it is the facilitation of a deal which will make this country poorer.
A strong, coherent Labour alternative to this shabby, Tory Brexit is absent – it has been since this Parliament began.
Totally demoralising. /1
https://t.co/cRVtopz5Qx

However, left-wing journalists and grassroots activists Owen Jones and Paul Mason have come out in support of Corbyn’s Brexit demands. Mason told his Twitter followers that “any Labour MP who undermines this stance should have whip withdrawn.”

Corbyn outlines Labour conditions for Brexit: they are unmeetable without a split in the Tory party. Bring it on. Any Labour MP who undermines this stance should have whip withdrawn: the key is customs union and shared institutions. See @guardian breaking now… pic.twitter.com/wckvYgojli

For those of us who didn’t want Brexit, trying to reconcile the referendum result with the country’s best interests – from protecting the economy to safeguarding hard-won rights – has been the main challenge. Corbyn’s proposals make sense to me. https://t.co/JwED9KF1Qppic.twitter.com/qpeLS1rHKv

On Corbyn tonight – ‘a big, strategic move. While not everyone is ready to come to terms with the fact that we are leaving the EU, Jeremy is setting out a realistic route-map to the kind of long-term partnership with the EU which most would accept.’ – non-Corbynista MP

May arrives in Brussels on Thursday for showdown talks with EU officials in a desperate attempt to broker the necessary changes she requires to get her deal through the House of Commons.

President of the EU Council Donald Tusk caused outrage among Brexiteers on Wednesday, after he lashed out at the UK, declaring that he wondered what the “special place in hell” looks like for those who pushed for Brexit without a clear plan on how to deliver it.