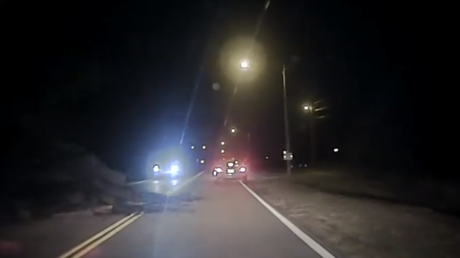 A Tennessee police officer miraculously escaped with only minor injuries after an SUV traveling on the other side of the road suddenly hit some debris, flew into the air, and landed on his police cruiser.

The entire dramatic incident was captured by the officer’s dashboard camera last Wednesday at 6:30am in Bristol, Tennessee.

That morning, the officer was responding to reports of a rock slide that was partially blocking Raytheon Road, when an SUV driving in the oncoming lane hit the pile of debris and went airborne. In the video, the vehicle flies out of frame towards the cop car mere moments before the officer’s windscreen cracks.

The officer was injured and trapped in his vehicle, according to a police statement, and had to be taken to hospital “for treatment of what are believed to be minor injuries.” The other driver refused medical transport, police said.

Both vehicles sustained serious damage and the accident is being investigated by the Tennessee Highway Patrol.