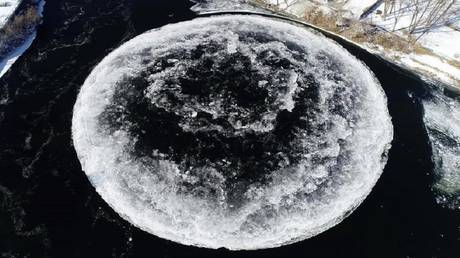 A giant spinning ice disk spanning 298 feet (91 meters) has suddenly appeared on a river in Maine. The mesmerizing & rare natural phenomenon resembles the Moon and has grabbed the attention of people all over the world.

The slow-turning structure formed in the Presumpscot River in the small city of Westbrook. The captivating phenomenon occurs in river bends where faster swirling currents create a force that erodes ice edges as it spins.

Drone footage of the weird formation shows it in all its moon-like glory, and video shared by delighted locals proves the disk also works as a makeshift raft for ducks and other birds.

A river ice hydraulics expert, Steven Daly, told the NY Times there are only one or two reports of these kind of ice disks in the US every year, and even then they are never this huge, usually forming in the 20 to 30 foot range.

Westbrook City’s marketing and communications director Tina Radel captured the drone footage of the disk and posted it online.

“It’s still spinning, so it could get even larger,” Radel told the Boston Globe. “We are only allowed to fly 400 feet high with the drone, and I wish I could have gone even higher [directly above it], because I could get the whole thing – that’s how wide it is.”