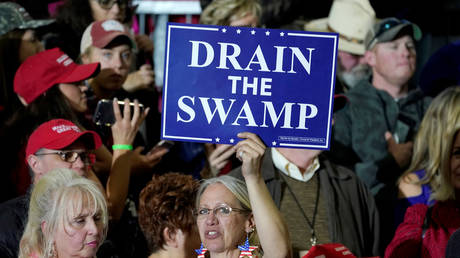 The ‘For the People Act’ (HR1) includes several relaxations on voting restrictions, allowing convicted felons to vote and automatically registering to vote all citizens who apply for services, change their addresses, or enroll in college – measures Republicans see as an invitation to voter fraud.

Attempts to insert language affirming that “allowing illegal immigrants the right to vote devalues the franchise and diminishes the voting power of United States citizens” were blocked by the Democratic majority, sending the GOP into sky-is-falling mode.


But the gargantuan legislation, which passed the House strictly along party lines, stands little chance of becoming law. Senate Majority Leader Mitch McConnell derided it as the “Democrat Politician Protection Act” and declared it would never see the Senate floor “because I get to decide what we vote on,” while President Donald Trump threatened to veto it if it somehow passed the Senate.

The 700-page bill envisions matching donations for candidates who reject “high-dollar contributions” – a recent trend among Democrats trying to appear independent from the corporate political machine – by fining law-breaking corporations and instituting a confusing voucher program – which Republicans lost no time in painting as a giveaway of tax dollars to politicians.

Democrats did not design #HR1 to protect your vote. They designed it to put a thumb on the scale of every election in America and keep the Swamp swampy. pic.twitter.com/4L9VNALigN

H.R. 1, proposed by House Democrats, is more about rigging elections than eliminating corruption. It limits free speech, weaponizes the FEC, funds campaigns with taxpayer dollars, and usurps the rights of states. #NOTforthePeopleAct

It also bars members of Congress from serving on the boards of for-profit companies and places restrictions on the so-called “revolving door” between government and the private sector, all provisions that have for long been on the wish list of the progressive wing of the Democratic Party.

The bill also tightens disclosure rules for some political activities so strictly that the American Civil Liberties Union has urged its members to vote against it for impinging on the First Amendment. The inclusion of several measures clearly meant to needle the president, including a requirement that candidates turn over ten years of tax returns, seems almost designed to alienate possible GOP collaborators.

Democrats are determined to stifle the free exchange of ideas. #NOTforthePeopleActpic.twitter.com/OfbxzM1CQE

Rep. Jim Jordan (R-Ohio) denounced it as an attack on Trump, as well as a restriction of free speech, though some of his followers begged to differ.

You ARE part of the swamp.

(H.R. 1) to expand Am access to the ballot box, reduce the influence of big $ in politics, & strengthen ethics rules for public servants

Please explain in detail your accusations.
It assures free and fair elections in this country.
Are you afraid more people are going to vote for “the other guy” if you can’t cheat anymore?
If not…then get behind transparency.
You sound like a bunch of sore losers.