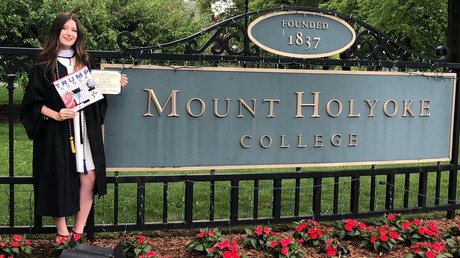 A conservative student at a Massachusetts liberal arts college was booed by liberal students at her college graduation ceremony — and now she has chronicled the ‘harassment’ she said she faced as a student with conservative views.

Kassy Dillon, who was a Republican student at Mount Holyoke College and the founder of the Lone Conservative website, decorated her graduation cap with Trump campaign, National Rifle Association (NRA) and other conservative memorabilia — but liberal students were not amused and made their feelings known.

“When I walked up to the stage, I was booed and I was shocked,” Dillon told Fox News. “I figured people would be staring at me but I wasn’t expecting a boo by any means.”

Dillon said that other students were making “snide remarks” and going so far as to tweet negative messages to her during the ceremony. She said the negativity directed toward her was so obvious that one of her college professors actually came and apologized to her after the ceremony.

After her graduation, Dillon took to Twitter to chronicle the “harassment” she and other conservative students had faced during her time at the college. Liberal students, she said, would regularly attack her and other students while they sat eating their lunch or online on Yik Yak, an anonymous messaging app for college students.

2/ It all began freshman year. I met @realYDB who was fearlessly conservative and we quickly became well-known & unliked on campus. Our peers began attacking her on campus & online. I remember sitting with her at lunch as people yelled & made fun of her. https://t.co/JUJ6pfcy0r

When she expressed public support for then-candidate for president Donald Trump, Dillon said she was “physically threatened and harassed,” with students turning their anger and frustration at Trump against her.

Eventually, the college decided to feature Dillon on the school’s website to display “political diversity” — but liberals weren’t happy with that either, with some even going as far as to encourage students to call the college president’s office to complain about her inclusion on the website.

When Dillon went to study abroad, a student employee threatened to shred her College Republicans club file — a threat which the college was forced to apologize for, saying it was “not in keeping with our expectations for student staff.”

17/ Then I studied abroad. My peers missed me so much that they threatened to shred my College Republican club’s file! https://t.co/XLDbSscxZx

In one tweet, Dillon explained that she decorated her graduation cap with Republican memorabilia to send the message to her fellow students that “in the real world, you’ll have to work with people you disagree with.”