A California congressman has put forth a resolution proposing that the US recognize the island of Taiwan as a “sovereign and independent country.” The move is sure to anger China, which considers Taiwan to be a rogue province.

Rep. Dana Rohrabacher (R-California) submitted a ‘sense of Congress’ resolution to the House Foreign Affairs Committee on Wednesday, urging the US to declare the ‘One China’ policy “effectively obsolete” and recognize the “obvious reality” that Taiwan has been an independent country for over 50 years.

The US should also “aggressively support Taiwan’s full participation in the United Nations and any other international organizations of which the United States is a member, and for which statehood is a requirement for membership,” says the resolution, which was posted on the website of the Formosan Association for Public Affairs (FAPA).

The government in Taipei welcomed Rohrabacher’s proposal. Regine Chen, a senior official at the Ministry of Foreign Affairs, told Focus Taiwan news channel that Taipei will “continue to work closely with our friends in the US Congress over the latest developments regarding the proposal.”

Rohrabacher’s initiative comes just a week after the US-funded American Institute of Taiwan (AIT) unveiled its new $256 million headquarters in Taipei, over Chinese protests. The US-based nonprofit acts as a de facto embassy of Washington on the disputed island. 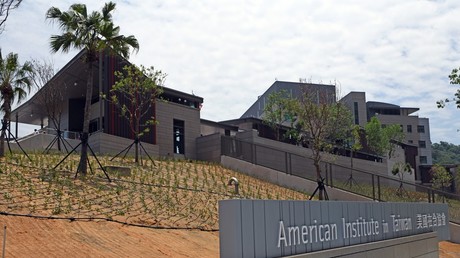 “This trend is highly dangerous for Sino-US relations and regional peace, since the Chinese mainland will make no compromise on the Taiwan question,” Da Wei, director of the Institute of American Studies at the China Institute of Contemporary International Relations, told the Global Times on Thursday.

“China will not retaliate against every single provocative move from the US, but when the provocations have accumulated and reached a specific level, China will no longer keep silent and may take countermeasures, which might surprise the US,” Da told the English-language Chinese daily.

Rohrabacher’s proposal comes at a time when the Trump administration has escalated the trade conflict with Beijing, with tariffs and counter-tariffs on $100 billion worth of Chinese and US goods scheduled to take effect on July 6.

Diao Daming, a US expert who teaches at the Renmin University of China, told the Global Times that Rohrabacher’s resolution is part of a trend in Washington, pointing to the January op-ed by the new National Security Adviser John Bolton, who also called for revisiting the ‘One China’ policy.

In March, US President Donald Trump signed a law promoting business and diplomatic exchanges with Taiwan, which also drew protests from Beijing.

The US has adhered to a ‘One China’ policy since 1972. The Shanghai Communique, signed during President Richard Nixon’s visit to China, says that Washington “acknowledges that Chinese on either side of the Taiwan Strait maintain there is but one China and that Taiwan is a part of China.”

The Chinese constitution calls Taiwan “part of the sacred territory of the People’s Republic of China” and calls for “reunifying the motherland.”

Taiwan was ceded to Japan in 1895, following the Chinese defeat in the Sino-Japanese war. US ships ferried the Kuomintang (Chinese Nationalist) forces to the island in 1945, to accept the surrender of the Japanese forces. The island became a refuge for the nationalists in 1949, after Mao Zedong’s Communist forces triumphed in the Chinese Civil War. The Taiwan-based Republic of China lost its UN seat in 1971, however, when the People’s Republic of China was recognized as the legitimate government.