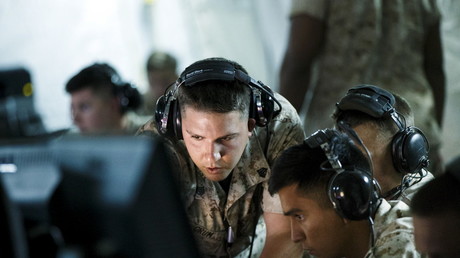 The dwindling numbers of eligible recruits applying to the US military may force Congress to increase the number of fitness waivers. The move is ostensibly aimed at encouraging more high-skilled recruits to apply.

“Should we make it easier for someone who has, for example, expertise in computers to serve in the military even though they can’t meet all the physical requirements?” House Armed Services Committee Chairman Mac Thornberry (R-Texas) said Wednesday, as cited by Military News. “Maybe there needs to be limited exceptions for these high demand areas. All of these are good discussions to have.”

Last week, Congressman Thornberry had the chance to discuss what the recent agreement in the defense budget means to our area. https://t.co/sTMxAavh5s

The House Armed Services Committee is set to begin work on its annual defense authorization bill this week, which allocates and prioritizes funding for the military. However, the problem of eligibility runs deep: 71 percent of 17- to 24-year olds in the US are ineligible to enlist in the military at present, meaning that 24 million of the 34 million people in that age bracket would be precluded from applying to the armed forces, even if they wanted to, under current requirements.

Of that group, roughly half cannot enlist because they failed to meet current Pentagon health and fitness requirements. Those statistics “are not a commentary on just the military. It’s a commentary on what is happening in society,” Thornberry stated.

“I’m for experimentation. I’m for trying things,” Thornberry said. “That’s true whether we’re talking about hardware or personnel issues. We need to try some things, because doing what we have always done because we’ve always done it that way doesn’t work.”

Moreover, the US military is experiencing a shortage of recruits applying to become pilots, a role which, in the case of fighter pilots, can be extremely physically demanding. There is also a shortage of recruits applying for other roles, such as cybersecurity experts, which are more expertise-based and mentally – as opposed to physically – challenging.

“We don’t want to sacrifice quality. If we lower the quality, yes we might be able to make our mission, but that’s not good for the organization,” Major General Jeffrey Snow, the Army’s current Recruiting commander, said, as cited by The Heritage Foundation.

“I don’t think the American public would like us to lower the quality of those joining the Army if they knew it’s going to impact our ability to perform the very functions our nation expects us to do.”

To enlist in the US military, an applicant is required to have a basic level of physical fitness in addition to a high school diploma or a General Equivalency Diploma (GED). The main obstacles preventing so many young Americans from enlisting include health problems, a lack of physical fitness or education, and past criminality. For instance, a criminal record that is serious enough prevents one out of every 10 young adults from being able to join the Armed Forces – meaning that 3.4 million people who would otherwise make the cut are unable to join.

In addition, the obesity epidemic across the US is plaguing military recruiters. “The obesity issue is the most troubling because the trend is going in the wrong direction…By 2020 it could be as high as 50 percent, which means only two in 10 would qualify to join the Army,” Major General Allen Batschelet, the commanding general of Army Recruiting Command, said, as cited by the Heritage Foundation.

In February, US Defense Secretary Jim Mattis broke with a long-standing tradition by imposing the military’s first-ever “universal retention” policy across all four branches of the armed forces. Research carried out last year by the military found that 286,000, or 14 percent of all active and ready reserve personnel, were non-deployable for a variety of reasons and restrictions, including proximity to retirement or too little mandatory service time remaining or health issues.