As bullying allegations mount against Speaker of the House of Commons John Bercow, a former colleague has likened his behind-the-scenes behavior to that of Hollywood mogul Harvey Weinstein.

Bercow has been accused of bullying by multiple members of Commons staff, including several former secretaries. David Leakey, the former Black Rod, responsible for maintaining the buildings, services, and security of the Palace of Westminster, has gone one step further, comparing Bercow’s alleged behavior to that of disgraced film producer Weinstein. 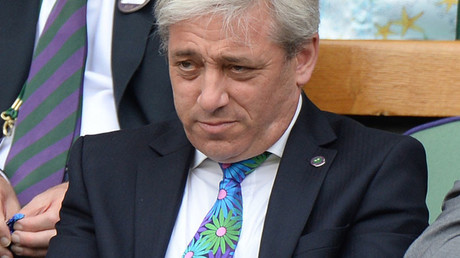 “John Bercow is not an altogether bad Speaker. But then Harvey Weinstein is not an altogether bad film mogul,” Leakey told LBC Radio this weekend, as cited by The Daily Mail. “He ran a fantastic film studio but he stepped over the line and had to stand down. There needs to be checks and balances for people in public office. There can’t be one rule for others but not for Mr Bercow.”

“His explosive and intemperate behaviour is legendary, objectionable and unworthy of someone in such public office. There were lots of people who were, frankly, terrified of the Speaker,” Leakey said of Bercow when speaking to PoliticsHome.

Leakey also drew comparisons to former Defense Secretary Sir Michael Fallon, The Sunday Express reports, adding: “Michael Fallon was not a bad secretary of state, he did a really good job… but he breached the code and stepped down.”

“I’m not calling for [Bercow] to step down. The only people who can get him to step down are Members of the Commons.”

Bercow’s former chief of staff Angus Sinclair claimed the speaker had bullied him. Sinclair also claims he was paid £86,250 ($116,884) in hush money in 2010 but has since broken an alleged non-disclosure agreement saying that it “was in the public interest to know why I left.”

Last year, Bercow himself called for “zero tolerance of sexual harassment or bullying here at Westminster or elsewhere.” He also admonished Boris Johnson after the foreign secretary addressed Emily Thornberry as an accessory of her husband.

It has also been reported that an unnamed, sitting cabinet minister is willing to give ‘first hand’ evidence against the embattled speaker. Bercow has vehemently denied the allegations of bullying.

Commons Leader Andrea Leadsom said that the problem of bullying in the British Parliament “arguably begins at the top” and encouraged people to speak out. “I am so grateful to the [House] staff who do so much for us … and so the allegations that have been raised with me have come as a shock,” Leadsom told the Sunday Times. “Bullying and harassment has got no place whatsoever in the workplace, so I am glad people are speaking out and I am absolutely determined that parliament is going to become one of the best places to work and for people to be treated with respect and dignity.”

Conservative MP Andrew Bridgen is attempting to refer Bercow to the Parliamentary Standards watchdog, though it is unclear how any investigation into the accusations would be conducted or indeed if any authority exists to enforce a potential verdict. The watchdog can only make recommendations to the Committee on Standards and it is unclear what, if any, outcome such recommendations would have. In addition, the independent inquiry, led by Dame Laura Cox QC, a former High Court judge, cannot investigate nor rule on specific instances.

Some in Westminster have downplayed the significance or the veracity of the claims, while scoffing at the Weinstein comparison.

Now those who criticise our Speaker for “banging his fist on a table & shouting” are comparing him with Harvey Weinstein! Pathetic #EnoughisEnough

Andrew Adonis, an MP for the Labour Party lambasted Leakey, describing his public comments as an “angry outburst from the retired ex-protocol officer of the House of Lords who didn’t like the fact that the current Speaker is a reformer.”