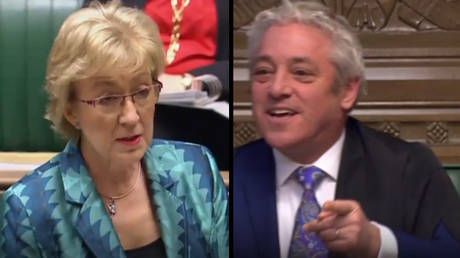 The House of Commons was the scene of another bad-tempered exchange between Andrea Leadsom and John Bercow on Thursday as the leader of the house accused the speaker of “muddying the waters” over an upcoming Brexit motion.

Leadsom’s remark drew an audible gasp from many in the chamber and prompted a strong clarification from Speaker Bercow.

“For the avoidance of doubt, I haven’t muddied any waters,” he said. “I don’t try to tell the right honorable lady how to do her job and I treat her with great courtesy and will continue to do so. Nobody’s going to tell this speaker how to stand up for and persistently champion the rights of Parliament. I have done it, I am doing it and I will go on doing it and I couldn’t care less who who tries to obstruct me.”

This isn’t the first time Leadsom and Bercow have clashed in the Commons. The sparkiest recent example came last December when Leadsom dredged up a clash from earlier in the year in which Bercow was accused of calling her “stupid.”