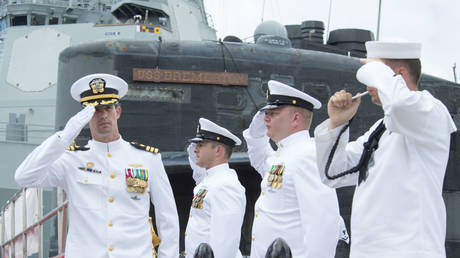 An American submarine commander has been relieved of duty after he hired a horde of “provocatively dressed females” to entertain himself and his sailors while being stationed in the Philippines.

Capt. Travis Zettel was relieved of duty last August for “inappropriate personal conduct” after allegedly “ordering” ten girls to his hotel while his sub, the USS Bremerton, was ported in Subic Bay, Kitsap Sun reported, citing the details of the incident obtained through a Freedom of Information Act request.

After the escorts arrived the commander was witnessed enjoying the company of “provocatively dressed females.” At least three “local females” were seen holding Zettel by his arms as he “wandered around” greeting his fellow seamen at the hotel in March 2018.


Such a warm reception accorded to American sailors overseas did not go unnoticed and was reported to the Inspector General’s hotline. After USS Bremerton returned to Naval Base Kitsap in Washington state in May to begin decommissioning, the Naval Criminal Investigative Service opened a probe into alleged misconduct. Confronted with the allegations the captain admitted paying for “female accompaniment.” Following the scandal, Zettel was relieved of his command and reassigned to another position within Submarine Squadron 19. Other sailors subject to the probe were not reprimanded.