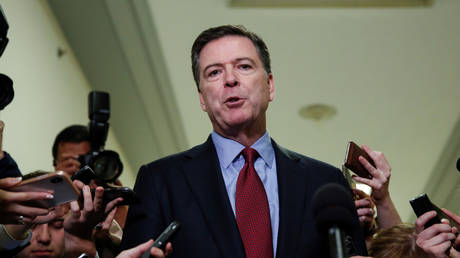 Robert Mueller’s report, concluding that President Trump didn’t collude with Russia in 2016, has hit some establishment bigwigs hard. Spare a thought for poor James Comey, lost in the woods and ridiculed on Twitter.

After two years of investigation, Special Counsel Robert Mueller gave Attorney General William Barr his final report on Friday. Summarizing the report on Sunday, Barr revealed that Mueller couldn’t find the elusive ‘Russian Collusion’ he was tasked with unearthing, and President Donald Trump declared his own “Complete and total exoneration.”

After sustaining themselves for nearly two years on a diet of pure, unrefined Russian hysteria, America’s liberal pundits and Democrat politicians began to melt down. It wasn’t pretty. Former FBI Director James Comey, among Trump’s most vocal opponents, took a more pensive approach, going for a walk in the woods to contemplate life post-Mueller.

Conservatives pounced, asking the former spook a few of their own. “Why did you sign off on the FISA warrant based on hrc lies?” Fox News pundit Sean Hannity asked.

Yes Mr @Comey . Let’s start with why did you sign off on the FISA warrant based on hrc lies in oct 2016. And in January 2017 say it’s “unverified and salacious” ? Did you commit a fraud of the FISA court or lie to the President Elect you hated?

Comey has been savaged by Republicans for allegedly using the unverified and salacious allegations outlined in the now-infamous ‘Steele Dossier’ to wiretap Trump campaign adviser Carter Page. That same dossier would be used to kickstart the FBI’s investigation into Trump’s supposed links with Russia, an investigation that would later be handed over to Mueller once Comey was fired by Trump in July 2017.

Is one of them “When am I going to jail”?

“Couldn’t agree more,” Senate Judiciary Committee Lindsey Graham (R-South Carolina) tweeted at Comey. “See you soon.” Graham has contended that Comey’s authorization of Page’s wiretapping was a partisan decision, and his tweet could be an indication that Graham intends to haul Comey before the committee to explain himself.

Yeah, so many questions indeed. We should start with that FISA warrant…

Commenters offered up a platter of memes, captions, and insults directed at the former FBI chief.

there’s one big question we still don’t have an answer to: did comey go into the woods specifically to take that photo or does he have a collection of pensive silhouettes that he keeps around just in case

This looks like the poster for an uplifting movie about a developmentally disabled man who teaches the cynics around him to appreciate the beauty of life https://t.co/6iInUaTwaM

Comey is not the only Russiagater with unanswered questions. Democrat Rep. Adam Schiff (California) greeted Mueller’s report by declaring that there is still “compelling” and “significant evidence of collusion” out there somewhere. With Schiff currently heading a House Intelligence Committee panel covering the same ground Mueller did, Comey’s questions might just get answered some day.

In the meantime, Comey will probably spend his days wandering the wilderness, searching through the undergrowth and gazing out to sea, looking for the faintest hint of Russian collusion and pondering life’s big mysteries.