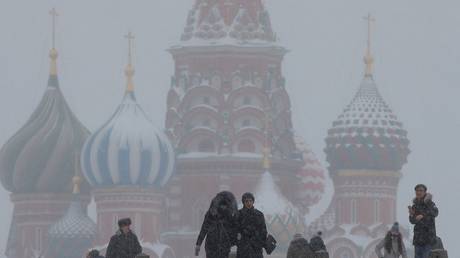 US President Donald Trump has caused a meltdown on Twitter with a post asking where “global waming” had gone, in response to a vicious cold snap hitting the Midwest.

“What the hell is going on with Global Wa[r]ming? Please come back fast, we need you!” Trump tweeted on Monday evening, talking about record-setting chill in the “beautiful Midwest.”

In the beautiful Midwest, windchill temperatures are reaching minus 60 degrees, the coldest ever recorded. In coming days, expected to get even colder. People can’t last outside even for minutes. What the hell is going on with Global Waming? Please come back fast, we need you!

The president’s critics immediately swarmed with responses and mentions, dragging Trump for not knowing the difference between climate and weather, being a “climate change denier” – as well as making a “waming” typo.

There were some, though, who realized Trump was probably just trolling the media as usual.

If you cared about facts, you would know that climate change doesn’t only cause temperatures to increase. Climate change causes both cold and hot extremes.

Stop asking Betsy DeVos to explain climate change to you.

Weather is a day to day event. It can be cold outside one day and hot outside the next. Climate is averaging weather over a long period of time like 30-50 years. And if you look at the changes in our climate over time, it is absolutely horrifying.

Global WAMING? This is worse than hamberders

I love this because you are trolling and they fall for it every time.

I love this because you are trolling and they fall for it every time.

“Global warming” was the term used in the past to describe the gradual rise of average temperatures worldwide, which many scientists attribute to human-produced factors like greenhouse emissions. “Global climate change” has since become more used. The change is reflected in various extreme weather phenomena, like the record heat in Australia and the drastic cold snap in the continental US.

The issue however is politicized in many countries, including the US, where some members of the Republican party have long denied that the climate change was taking place or at least doubted that it was made by humans. On the opposite side of the spectrum are left-wing progressive politicians, who say the US needs a radical policy change – a ‘Green New Deal’ – to address the problem.

Last week, a former broadcast meteorologist advocated that his colleagues should use their reputation with audiences to become advocates for climate change awareness.

“TV meteorologists are uniquely positioned to lead climate change conversation. Let’s get to it,” wrote Jeff Berardelli in the Washington Post.