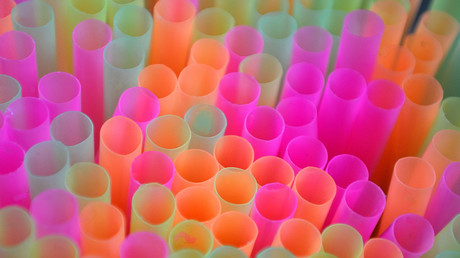 With plastic straws banned throughout California and offenders in one city facing possible jail time for using them, dissidents have assembled to resist the only way they know how: By sharing memes on the internet.

The Californian city of Santa Barbara banned single-use plastic straws earlier this month, in a bid to reduce marine pollution. The city ordinance states that offenders will be given a written warning but serial slurpers are liable for a $1000 fine or six-month jail sentence – per straw.

However, city official Nina Johnson told Fox News that “no one will go to jail for using a plastic straw or providing a straw to a customer.” According to her, the law will not be enforced to its full extent and the text providing for jail sentences will “most likely be deleted.”

Still too terrified to march in the streets for fear of being nabbed by the eco-police, disgruntled Americans took to Twitter in protest. If they want our straws, one argued, they can “come and take them.”

While feel-good environmentalism is as Californian as surfing and cool ranch dressing, some see the law as draconian, especially considering that handing out straws now merits the same punishment in the great state of California as knowingly infecting a partner with HIV, at least on paper.

Ahhhh, California. Where you can legally inject yourself with heroin at an approved facility, but you get jail time for giving someone a plastic straw. https://t.co/pHX2EIDciX

Others see it as a pointless crime to focus on. California’s cities have other problems, like drug abuse, trash, and a teeming homeless population defecating at will in the streets. In  San Francisco this week, the city’s Board of Supervisors passed a measure to block stores, restaurants and bars from selling plastic straws, which must now be voted on next week, before being signed into law by the mayor.

While the city’s new mayor, London Breed, struggles to get a handle on the city’s public pooping problem, city supervisor Katy Tang described the straw ban as an example of how smug San Francisco “has been a pioneer of environmental change.”

California cannot enforce their borders or keep the homeless from defecating in the streets, but if YOU hand out plastic straws, YOU are going to serve jail time!

Makes perfect sense to a liberal I bet.

In parts of California now, a person can go into a public park, shoot up heroin, throw the used syringe on the sidewalk, walk into the street, then poop in the highway — all without consequence. But the moment that person pulls out a plastic straw… https://t.co/gNumjdZSjApic.twitter.com/ZniefuCRNl

Drowning in human feces and used needles, too. Don’t worry, though, no more plastic straws! California’s really got its priorities straight 🤣🤣🤣

Banning plastic straws is all the rage at the minute. Seattle became the first major US city to ban the offending utensils this month and British Prime Minister Theresa May took time out of her busy schedule of Brexit-bungling to ban plastic straws, stirrers and q-tips in April. Starbucks also announced this month that it would phase out plastic straws in all of its 28,000 stores worldwide.

Resistance to the new eco-conscious overlords is futile. Santa Barbara will begin to enforce its straw ban next July, and one can only wonder whether prohibition will usher in a new era of underground straw-serving speakeasies and street corner black market straw-slingers.