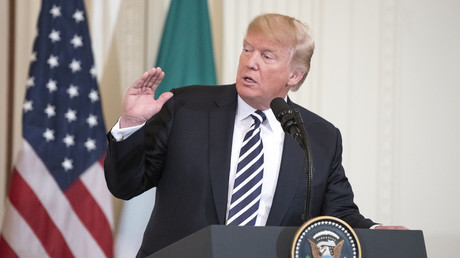 US President Donald Trump took to Twitter to say that collusion isn’t a crime, and that he never colluded with anyone. His tweet came as the first trial from Special Counsel Robert Mueller’s ‘Russiagate’ probe begins.

“Collusion is not a crime,” he tweeted Tuesday. “But that doesn’t matter because there was No Collusion (except by Crooked Hillary and the Democrats)!”

Collusion is not a crime, but that doesn’t matter because there was No Collusion (except by Crooked Hillary and the Democrats)!

Trump’s former campaign manager, Paul Manafort, is set to appear before a Virginia court on Tuesday. While Special Counsel Robert Mueller is tasked with uncovering alleged collusion between the Trump campaign and Russia in the runup to the 2016 election, Manafort is being tried on unrelated tax and bank fraud charges dating back over a decade.

President Trump has repeatedly denied any accusations of collusion, and has branded the Mueller investigation a politically motivated “Witch Hunt,” started by his political opponents on a false premise.

There is No Collusion! The Robert Mueller Rigged Witch Hunt, headed now by 17 (increased from 13, including an Obama White House lawyer) Angry Democrats, was started by a fraudulent Dossier, paid for by Crooked Hillary and the DNC. Therefore, the Witch Hunt is an illegal Scam!

On Monday, Rudy Giuliani – Trump’s attorney – also asserted on television that “collusion is not a crime,” and declared Trump “absolutely innocent.”

“I’ve been sitting here looking in the federal code trying to find collusion as a crime,” the attorney and former New York City mayor told Fox & Friends. “Collusion is not a crime.”

The Mueller investigation has been ongoing for over a year, and in that time has shifted away from trying to find evidence of ‘Russian collusion’ to looking for evidence that Trump and his team sought to obstruct the investigation itself. Mueller has even suggested recently that the President’s tweets will be examined for evidence of obstruction.

Both approaches were rubbished by Giuliani on Monday. “This is a theater of the absurd,” Giuliani said. “There’s not a single stitch of evidence of collusion…and the obstruction thing is crazy.”