Presidents of 58 private colleges and seven public universities earned more than $1 million in total compensation in 2015, a growth of 48 percent. Some of them topped $3-4 million in earnings, according to a new report.

Among the highest earners were 10 who made more than $2 million, up from eight who crossed that mark the year before, while another 48 made at least $1 million, according to a survey from the Chronicle of Higher Education.

Nine of the 10 highest-paid chief executives earned more from bonuses and deferred compensation than they did from base salaries: https://t.co/klpdRgx4Vd

Topping the list was Wake Forest University’s Nathan Hatch, who total pay of $4 million included a payment of nearly $3 million as a perk for leading the North Carolina school for 10 years.

Hatch was followed by Emory University’s James Wagner, who received $3.5 million, and the University of Southern California’s C L Max Nikias, with $3.2 million.

Ever wondered how much your college’s president makes? Our executive compensation data lets you take a look: https://t.co/k7U1h25rTP

The average chief received total compensation of nearly $570,000, including salary, bonuses and benefits.

The findings were part of The Chronicle of Higher Education’s analysis of private and public campus compensation of 660 private colleges from 2008-15 and nearly 250 public universities and systems from 2010-16 collected from federal IRS Form 990s.

“The number of presidents earning over $1 million is unusually high,” said Dan Bauman, database reporter for The Chronicle. “We attribute that, in part, to a market where presidents are negotiating more deferred compensation and bonus packages before they take the job.” 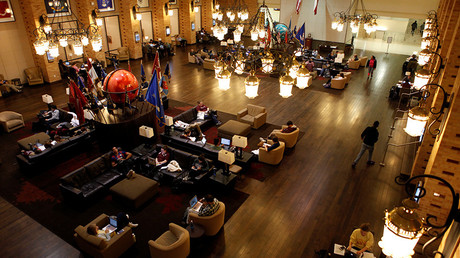 Those deferred packages, some spanning 10 years, were paid out fully in 2015.

Universities don’t pay capital gains taxes and investment taxes and gifts to colleges remain tax-deductible, according to Richard Vedder, a professor emeritus of economics at Ohio University and director of the Center for College Affordability and Productivity.

“We’re giving these people tax privileges because we think they’re serving the public good,” Vedder told the Laredo Morning Times. “But it seems that a disproportionate share of the benefits” go to executives.

Vedder said that running a university is tough and leaders have to be good fundraisers, brilliant academics and skilled diplomats as they deal with campus protests.

“But that’s been true for decades,” he said. “I think we are overpaying.”

At a time when many private campuses are struggling with enrollment and financial losses, fat paychecks could fuel the debate.

Tuition costs at private institutions have risen by 241 percent since 1980, representing a 6.5 percent raise per year while household incomes have remained stagnant resulting in increases in student loan borrowing, according to 2017 Federal Reserve Report.

Student loan debt is the second highest debt in the US with an estimated $1.45 trillion. Among the 44.2 million burrowers, student loan debt is roughly $620 billion higher than the total US credit card debt, according to the report.

In 2017, 70 percent of graduates left college with student loan debt that averaged $37,000 per student. Student loan delinquency rates reached 11.2 percent, a rate that has surged in recent months.