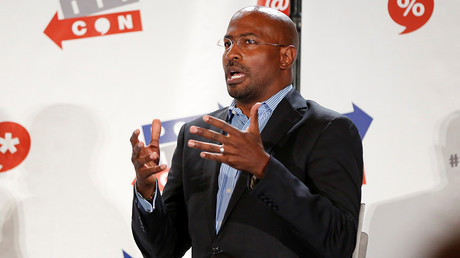 Project Veritas has released another video showing a CNN employee admit the Russian scandal gripping US politics is “just a big nothing burger.”

Political commentator Van Jones was filmed by a member of the conservative organization Project Veritas saying the Russia story is “just a big nothing burger.”

This comes in the wake of the group’s video revealing CNN producer John Bonifield admitting the network’s focus on allegations of Russian interference in the US elections is just for ratings and that the story is “mostly bulls*t right now.”

“Like, we don’t have any big giant proof,” Bonified added.

Project Veritas was formed by activist James O’Keefe in 2010 with a mission to “investigate and expose corruption, dishonesty, self-dealing, waste, fraud and other misconduct.” It has since been sued for its information-gathering methods, primarily its targeting liberal organizations, and presenting its findings in a misleading, highly edited format that lacks the context of the entire conversations caught on tape.

The latest video shows Jones, a political commentator who regularly appears on CNN and has made statements about the Russian hacking allegations, standing outside what appears to be a CNN studio. A sign outside the building shows the date, June 26, 2017, which Project Veritas confirmed was the date it was filmed.

“What do you think is going to happen this week with the whole Russia thing?” the undercover reporter asks Jones.
“The Russia thing is just a big nothing burger,” Jones says with a shrug.
“Really?”
“Yeah,” Jones says.
“You don’t think that,” the cameraman says.
“There’s nothing there you can do…,” Jones continues, before trailing off to greet a man who is approaching. The footage then ends.

Responding to allegations of having altered footage in its favor, Project Veritas said in a statement: “[We] do not selectively edit our videos.”

“No other journalists are ever expected to release their raw notes to the press, so why should we release the raw video? Nothing said in the video was taken out of context,” it said a statement.