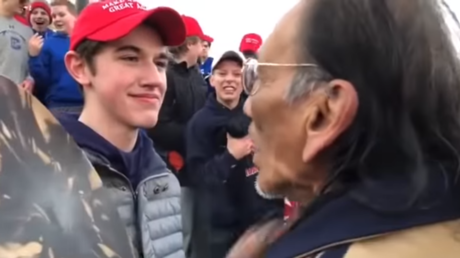 CNN will be slapped with a massive lawsuit for its “vicious” and “direct attacks” on Covington Catholic student Nick Sandmann, the kid’s lawyer told Fox News. The Washington Post has already been hit with a similar suit.

Sandmann was waiting for a bus home after an anti-abortion protest in Washington DC with his classmates in January when he was harassed by a group calling themselves the ‘Black Hebrew Israelites.’ He was then confronted by Native American protester Nathan Phillips. A short, deceptively captioned video circulated by several mainstream media outlets framed Sandmann as the villain, and the teen was bullied and harassed by hysterical Twitter users, celebrities and journalists.


“The CNN folks were online on Twitter at 7am retweeting the little one-minute propaganda piece that had been put out,” Wood continued. “They’re out there right away going after this young boy. And they maintain it for at least two days. Why didn’t they stop and just take an hour and look through the internet and find the truth and then report it? Maybe do that before you report the lies.”

Wood filed a similar suit against the Washington Post last month, accusing the paper of defamation, seeking $250 million in damages – the same amount that Amazon founder Jeff Bezos paid for the paper in 2013. The attorney said that the CNN suit may be worth even more “because of the way they went after Nicholas so viciously.”

CNN immediately ran the edited video of the encounter in January, refusing to correct the story for almost two days. In addition, the network’s journalists and contributors rushed to judge and condemn. The network declared that Sandmann had “taunted” Phillips, Host S.E. Cupp said that “there’s no place for this in our society,” while contributor Kirsten Powers called the boys’ “disrespecting an indigenous elder” a “fundamental problem.”

Teens in MAGA gear mock a Native American Vietnam vet, and @secupp wishes she could tell them there’s no place for this in our society. “Unfortunately, that’s wrong. Adults model this very behavior all the time—on social media and on the street. And it’s awful.” pic.twitter.com/Jdb6ISEb9l

Wood told Levin that the lawsuit will be filed early next week.

“I’ve got some young, smart lawyers that are working hard as we can,” he said. “Double-checking, and listen, when we file complaints, we’ve investigated it because we want to get it right. Maybe CNN can learn from that.”