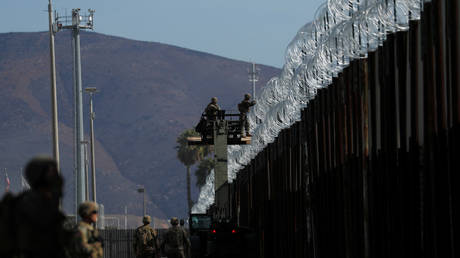 San Diego news station KUSI has claimed that CNN reached out to its team for help covering the debate around President Trump’s planned border wall, only to drop the idea once its reporter told the network that the wall works.

San Diego was until recently the first port of call many illegal immigrants saw after crossing into the United States from Mexico. Fenced off since 2010, the border here represents the first few miles of President Trump’s long-promised border wall and was constructed in June last year.

Also on rt.com
Trump calls situation at Mexico border ‘an invasion’ after trip to Texas


As the government shutdown enters its third week and Trump and Congressional Democrats remained unable to reach a compromise on funding a wall along the border, CNN got in touch with KUSI, an independent local news station in San Diego to ask its journalists whether the wall there works as intended.

KUSI’s Dan Plante responded that, according to his reporting, the wall works. Backed up by Border Patrol agents, walls and fences work, Plante found in his reporting.

“We have continuously been told by Border Patrol Agents that the barrier along the Southern border helps prevent illegal entries, drugs, and weapons from entering the United States, and the numbers prove it,” KUSI stated.

That was the last KUSI heard from CNN, who KUSI say “declined to hear from us.”

CNN maintains that the planned segment with KUSI was dropped for unrelated reasons, as “happens many times every day” in the news business. The cable network called KUSI’s claim “a non story.”

We called several local stations to book someone for a show. We didn’t end up booking any of them. That happens many times every single day. We did, however, book a reporter from KUSI for a story on immigration and the border wall in November. This is a non story. #factsfirst🍎

With Trump considering using emergency powers to build the wall without congressional support, the eyes of the nation have been fixed on the country’s 2,000 mile border with Mexico. President Trump visited border security personnel in McAllen, Texas, on Thursday, to drum up support for the wall. His round table discussion with local authorities created a gloomy picture of a crisis involving murder, drugs and human trafficking.

CNN sent the president’s consistent opponent Jim Acosta along to report from the frontier.

Standing behind a 30-foot slatted steel barrier, Acosta declared that he didn’t “see anything resembling a national emergency situation.” The veteran reporter added that “there are no migrants trying to rush toward this fence.”EditDelete

I found some steel slats down on the border. But I don’t see anything resembling a national emergency situation.. at least not in the McAllen TX area of the border where Trump will be today. pic.twitter.com/KRoLdszLUu

Trump himself jibed at Acosta, simply retweeting Acosta’s video with the caption “Dear Diary,” a phrase used by Trump supporters to mock Acosta’s rambling coverage of the President’s rallies.

Acosta: I found some slats on our border—there’s no emergency!

Everyone: Yup, that’s why we want a wall along our entire border

Acosta: The slats don’t run along the entire border—& sometimes migrants come thru!

Everyone: Yup, that’s why we want a wall along our entire border pic.twitter.com/dH6qSqBUDV

While Acosta found no evidence of a national crisis, CNN later reported that Mexican authorities found 20 burned bodies on a dirt road 50 miles away on the Mexican side of the border. The incident is believed to be the result of a confrontation between criminal gangs involved in the trafficking of guns, drugs and people.