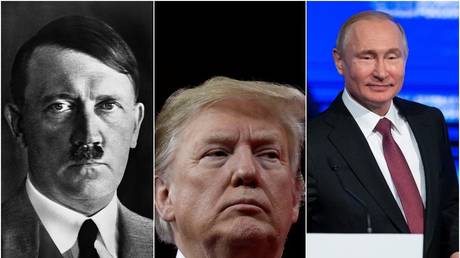 A CNN analyst and adviser at the Biden Institute has showcased her unmatched skill to roll all in one by comparing Donald Trump to Hitler for using a turn of phrase once shouted by Joe Biden and at the same time written by Putin.

Offering her thoughts on the president’s speech at the 2019 Conservative Action Conference (CPAC), Sam Vinograd told her CNN colleagues that she was horrified that Trump had spoken about “reclaiming our nation’s priceless heritage.”

For Vinograd, this was clearly a message lifted straight from Mein Kampf.


“His statement makes me sick, on a personal level, preserving your heritage, reclaiming our heritage, that sounds a lot like a certain leader that killed members of my family and about six million other Jews in the 1940s,” she said.
She went on to lament how Trump had used his CPAC address to “spread misinformation and conspiracy theories,” and that certain things he said “really” made it seem as if “Vladimir Putin scripted his speech.”

It wasn’t long before her eyebrow-raising remarks caught the attention of social media users – who found some glaring problems with her logic.

For starters, former vice president Joe Biden made a nearly verbatim declaration in 2011, when he told the Florida Democratic Party Convention that “it’s time to reclaim our heritage.” He yelled it, too – which seems like something Hitler might do.

Joe Biden in 2011: “It’s time to fight back! It’s time to reclaim our heritage!” pic.twitter.com/MKn3HHPrL1

To add salt to the open hypocrisy wound, Vinograd is a former Obama administration official who currently serves as an adviser to the Biden Institute, a think tank named in honor of – yes, you guessed it – Joe Biden.

Then, of course, there’s the inconvenient reality that Trump’s daughter converted to Orthodox Judaism in keeping with her husband’s Jewish faith. Others pointed out that the US Commission for the Preservation of America’s Heritage Abroad – a government agency that uses that scary Hitler word! – is chaired by an Orthodox Jew.

The president’s chairman of the commission for the preservation of America’s heritage is an Orthodox Jew from New York. Keep talking about Nazis you clown. https://t.co/sUMN2GtkW8

Vinograd’s comments about Putin also didn’t quite add up, with Twitter pundits expressing regret that she had failed to elaborate on which parts of Trump’s speech were allegedly written by the Russian president.

Twitter users were especially impressed by Vinograd’s lack of self-awareness, after she accused the president of “pretending that there are foreign people trying to influence our country in a way that just isn’t accurate.” Seconds later, she suggested Vladimir Putin wrote Trump’s speech.

Sam Vinograd: “President Trump is pretending there is a threat that foreigners are trying to control our government that don’t exist.” Ten seconds later: “How many parts of President Putin’s to-do list was Trump trying to accomplish today.” SMH

The televised train wreck also got two thumbs down from radio host and former CIA analyst Buck Sexton, who summed up his feelings about the segment with a perceptive observation.

This loony CNN “analyst” pulls off the trifecta of moronic, Trump derangement syndrome induced talking points-
all in one segment!