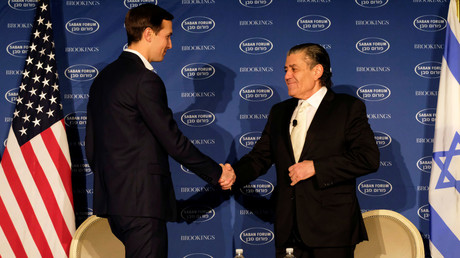 Jared Kushner, President Donald Trump’s senior advisor – and the man who allegedly ordered Gen. Michael Flynn’s “collusion” calls to Russia – has appeared at pro-Israeli donor Haim Saban’s event where he has been thanked for his lobbying on behalf of Israel.

Speaking at the three-day conference, prominent Clinton Foundation donor Saban thanked Kusher for “taking steps to try and get the UN Security Council to not go along with what ended up being an abstention by the US against a 50-year-old tradition.”

The multibillionaire was referring to Flynn’s admission that he had been told to ask Russia to delay a December 2016 UN Security Council vote on Israeli settlements. It has since been reported that Flynn was acting on Kushner’s orders, and that Israeli officials had contacted Trump’s team to ask for their help to veto the resolution, Reuters reports.

The efforts failed and the UN voted to pass a resolution demanding an end to Israeli settlements being built on Palestinian land in which the outgoing Obama administration abstained, rather than its usual vetoing.

“To be honest with you, as far as I know there’s nothing illegal there,” Saban said. “But I think that this crowd and myself want to thank you for making that effort, so thank you very much.”

Saban’s words put allegations of the Trump campaign’s alleged “colluding with the Russians” into perspective.

Although news that Flynn had spoken to Kislyak exploded across the media, claimed to be evidence of alleged Russian meddling in US politics, and prompted Flynn’s resignation last year, his charge sheet reveals the Trump transition team was doing the bidding of an entirely different government.

Again, the obvious intended beneficiary of the Kushner-directed calls made by Flynn to Russia (and every other UN Security Council member) was Israel, not Russia. And, at least in this case, Kushner was “colluding” with Netanyahu, not Putin: https://t.co/RwGrtZMsZT

Newsweek reported Saturday that Kushner also failed to disclose his role as co-director of the Charles and Seryl Kushner Foundation between 2006-15, during which time it funded an illegal Israeli settlement. This could have been seen as a conflict of interest in his appointment as the Trump advisor tasked with bringing peace to the Middle East.

Saban, an Israeli-American businessman and massive donor to the Clintons, funded the three-day Saban Forum event, which included a televised speech from Israeli Prime Minister Benjamin Netanyahu. Saban has said in the past, “I’m a one issue guy, and that issue is Israel.”

He appeared sceptical at Kushner’s team’s ability to solve the Israel-Palestine issue, calling team “a bunch of Orthodox Jews who have no idea about anything.”

The extent of Saban’s influence in US politics was illuminated in the WikiLeaks release of emails from Clinton campaign chair John Podesta, including one in which he told the campaign to “not allow them to steel [sic] the Jewish vote from us.”

Politico reports he raised over $11 million for the Clinton campaign in 2016, along with his contributions to the Clinton Foundation of between $10-25 million, and the $7 million he put towards a new headquarters for the Democratic National Committee.

During his talk with Kushner, Saban revealed how he met Trump’s son-in-law, explaining Kushner had written him an admiring letter in 2010 after he had read a profile on him in the New Yorker. Saban never read the letter and only learned of it when it was passed on to him during the election. “We became friends and we exchange ideas on an ongoing basis,” Saban said. “He advises me and I advise him.”

READ MORE: Why Flynn’s plea is a dead end for ‘Russiagate’ conspiracy

Kushner recalled assuring Saban during the election that Trump would be the best person for the Israeli-US relationship. “You should hope that Trump wins if you care about the US-Israel relationship.” he said.