Donald Trump must move on from the Mueller investigation, as he is merely fueling it by tweeting and making it part of the continuing narrative that Russia had an outsized impact on the election, analysts told RT.

Trump may be taking his frustration over the Russia investigation out on Attorney General Jeff Sessions. The president tweeted Wednesday: “If all the Russian meddling took place during the Obama administration, right up to January 20th, why aren’t they the subject of the investigation? Why didn’t Obama do something about the meddling? Why aren’t Dem crimes under investigation? Ask Jeff Sessions!”

The president continues to question the investigation and denies that there was any Russian collusion with him or his campaign.

RT: Is it fair? Is the president asking a fair question? Does the Obama administration and the actions of the former president deserve more than scrutiny, maybe to the level of an investigation? 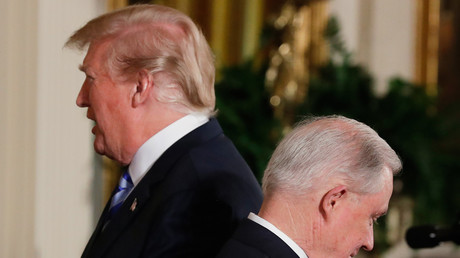 Mark Simone: Well, it happened on his [Obama’s] watch. He is responsible for it. I think it wasn’t anything wrong. It was just such a small thing. It has been blown out of proportion. Democrats always like to create some incredible boogeyman that we all have to fear. I’m sure there were Russian hacking bots, and I’m sure there were Indian ones, and Chinese ones. If you look at the actual numbers, it was minuscule. $100,000 on Facebook compared to $81 million spent by the campaigns. I think that’s the only reason that escaped the attention of the Obama administration – it was too small to have any real effect.

RT: How can they not investigate President Obama’s administration, if meddling was taking place in the intelligence community, which of course a lot of this Russia investigation is pinned on right now, because they are following all these agencies which are saying that Russia was meddling, they believe him then, but they don’t believe him when he says it was happening during the Obama administration. Where’s the accountability?

Robert Patillo: Let’s understand, President Trump has been going around for the last year and a half saying the entire Russia investigation was fake, phony, false and a hoax. So, the idea now that he wants to turn this around and say it was Obama’s fault. [Former FBI Director] James Comey was investigating these things. The Justice Department was looking into these matters, that is why we have the information that we do have on these points. What the president should do is fully cooperate with them on the investigation. And I agree with Mark. This is a miniscule point, this had not turned the election. Nobody believes Hillary Clinton lost the election because of Facebook ads from Russian bots. Nobody believes that Russians made Hillary not campaign in Michigan and in Wisconsin. She lost on her own free will by being an incompetent candidate. But whenever Trump goes through and tweets out, makes it a point to concentrate on these issues – he breathes new life into this investigation. We need to be moving on to the important matters of the American people.

RT: Finding out why the administration didn’t do anything if they knew Russia was meddling, it is kind of an important thing, if elections are important. What about that, Mark? 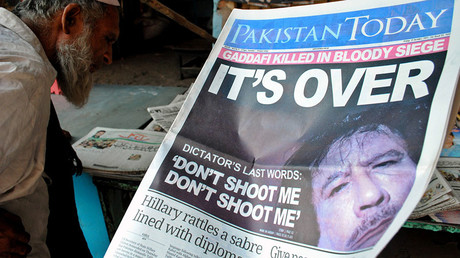 MS: They should look into it. Also the [Steele] dossier, that should be looked into. That was one of the greatest dirty tricks ever played in American politics. And Donald Trump was basically framed with this whole Russian collusion…

RT: Is Trump going after Jeff Sessions? Is this just another way to shine the light on him? How can he investigate the Obama administration, when he has recused himself?

MS: I keep asking everybody in the Trump administration about Sessions, they all tell me, “You just wait, just wait. He’s tough. He’ll come to life”… I’ve been waiting a year now. Nothing ever happens. I think he’s got to go at some point. You’ll never get another attorney general approved. So you have to take somebody already approved and in the administration. I have a feeling the search for that person is on right now.

RT: Is Trump battling in many ways in this regard? Is he actually baiting the Special Counsel Robert Mueller and setting the table that if he does not go back and investigate the methods of Russian meddling, if it did take place starting back in 2014, if he doesn’t go back and do this that it will never be a complete investigation and that will give Trump and his administration an escape in all of this?

RP: I think you’re giving far too much credit for Jedi mind tricks… He should have fired Jeff Sessions a long time ago instead of just using him as a punching bag for the last year. Jeff Sessions is clearly not the attorney general Donald Trump thought he was appointing. I don’t think you’ll get any static from Democrats if he decides to fire Jeff Sessions immediately. But this idea of ordering the attorney general to investigate your political opponents, smacks at directly of what we try to prohibit by having a separation between the executive branch and the Justice Department. What President Trump needs to do is go ahead and fire Jeff Sessions, get the taint out of there, elevate somebody else in the Justice Department to be attorney general. But right now Jeff Sessions cannot exercise his duties because of the competition and the anarchy going on between him and the president. 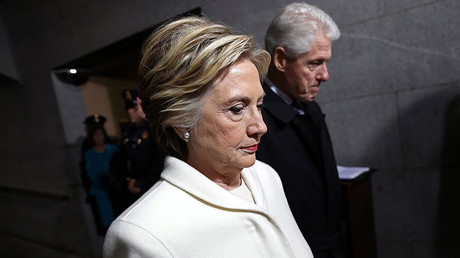 RT: Let’s talk about Russian meddling right now as far as following the money. You two gentlemen own companies. Hypothetically, you’re spending billions of dollars. I’m your competitor. I’m spending thousands. Would your expectation be that you would get more market share than me, that maybe you could get to the point where you could sell a hell of a lot more than me? I mean, how can the Russians be blamed when they spent pennies to influence an election, when there were billions actually spent?

MS: The whole thing is ridiculous. Mueller… while he was on a fishing expedition, only gets in these little small fish. He has proven nothing. He indicted 13 non-existent people that we’ll never see. This massive conspiracy. They keep saying every time they find somebody in Russia: “they’re tied to Putin.” I would imagine any big business guy has ties to Putin. You’re a donor, you’re a friend, just like in this country – every big business guy has ties to Chuck Schumer. That’s how you do business. But they’re blowing this all out of proportion. I get phishing emails every day from hackers. This stuff goes on in everything on the internet. It’s not the big demon they’re making it out to be.

RP: I agree completely. What we have to understand is that if you go to any barber shop or any nail salon or any restaurant in this country, nobody is talking about the Russia investigation, except people in the far fringes of the right and far fringes of the left. The average American voter cares about their 401k [retirement plan], taking care of their children, they care about security, they care about making sure their kids don’t get shot when they go to school. So the president has to move on from this point. Let Mueller do his investigation and let the chips fall where they may. But whenever he brings new life into it by tweeting out and making it part of the news cycle, he’s just continuing the narrative that Russia had an outsized impact in the election. I don’t think anyone believes that that is what resulted in the outcome.