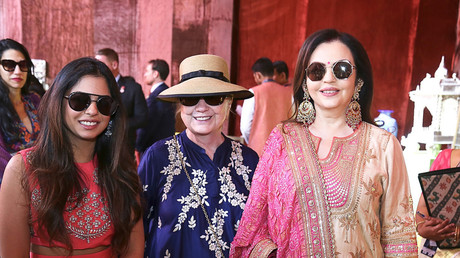 A video of Hilldog dancing with another former secretary of state and US presidential candidate, John Kerry, at the lavish ceremony has gone viral. Dressed in local attire, the pair danced to bhangra and Bollywood music with film stars Shah Rukh Khan, Aamir Khan, Karan Johar, Aishwarya Rai Bachchan among others.

The opulent event was Isha Ambani’s Sangeet, a traditional pre-wedding ceremony filled with singing and dancing, which was held at a lakeside palace in Udaipur in northwestern India this week.

Isha is the only daughter of India’s richest man, and the world’s 19th richest man with an estimated fortune of $43.4 billion.

Mukesh Ambani is the head of Indian oil and gas conglomerate Reliance Industries and also happens to be is a well-known donor to the Clinton Foundation, which would explain Clinton’s presence at the ceremony which included a private Beyonce concert. Clinton reportedly took Huma Abedin as her date.

World leaders are not typically known for their dancing skills. Former US President George W. Bush was widely derided for his questionable dance moves.

And who could forget embattled British Prime Minister Theresa May’s bizarre dance routines throughout her tenure as head of the British government.