Ex-UKIP donor Arron Banks has dismissed an Electoral Commission probe into his financial support for the pro-Brexit campaign as “bollocks.” He said it is being driven by unsubstantiated rumors of Russian interference in the referendum.

“Allegations of Brexit being funded by the Russians… are complete bollocks from beginning to end,” said Banks. He added that the investigation was “the Remain establishment once again trying to discredit the result and it’s all starting to get rather boring!” He signed off his statement by writing “Nostrovia” – a misspelling of the Russian toast “na zdorovie.”

The watchdog is seeking to establish whether Banks is the true source of loans that were reported to be in his name, and whether his company “was the true source of donations made to referendum campaigners in its name, or if it was acting as an agent.” 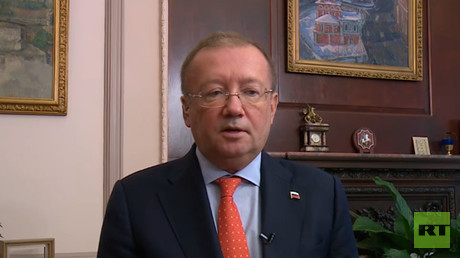 In addition, the Electoral Commission will examine whether or not any of the donations were from individuals or parties prohibited from funding campaigns in UK politics. Approved donors include most UK-registered companies, individuals registered to vote in the UK, trade unions and mutuals. Anyone donating more than £500 ($665) to a political campaign is legally bound to reveal the original source of the donation, in accordance with the Political Parties, Elections and Referendums Act 2000 (PPERA).

Bob Posner, director of political finance and regulation, and legal counsel at the Commission, said that “Questions over the legitimacy of funding provided to campaigners at the referendum risks causing harm to voters’ confidence.

“It is therefore in the public interest that the Electoral Commission seeks to ascertain whether or not impermissible donations were given to referendum campaigners and if any other related offences have taken place,” he added.

The probe follows calls by Labour MP Ben Bradshaw for the government to launch an investigation into the role of “dark money” in the Brexit vote. There is “widespread concern over foreign and particularly Russian interference in western democracies,” Bradshaw told the House of Commons.

At last! @ElectoralCommission confirms it has opened an investigation into Arron Banks, the main financial backer of the Leave campaign.

The Electoral Commission is already investigating another Brexit group, Leave.EU, which was set up by Banks and former UKIP-leader Nigel Farage. Leave.EU is reported to have worked with data firm Cambridge Analytica, whose involvement was allegedly not declared to the watchdog. Banks denied any wrongdoing and threatened the Commission with legal action.

Russia’s ambassador to the UK, Alexander Yakovenko, said that any notion of Russian interference in Brexit is “outright insulting for the British government and the British people.”