A leading African-American civil rights group has issued a travel advisory against flying on American Airlines, after repeated incidents involving black passengers over the past several months.

“The NAACP for several months now has been monitoring a pattern of disturbing incidents reported by African-American passengers, specific to American Airlines,” the National Association for the Advancement of Colored People said Tuesday. “We… are issuing a national advisory alerting travelers ‒ especially African Americans ‒ to exercise caution, in that booking and boarding flights on American Airlines could subject them disrespectful, discriminatory or unsafe conditions.”

The NAACP said it had made the decision to issue the travel advisory because passengers knew their rights and spoke out about the incidents. The organization said the repeated nature of the incidents “suggest a corporate culture of racial insensitivity and possible racial bias on the part of American Airlines.”

The advisory was issued a week after an activist, Tamika Mallory, with the Black Lives Matter movement, was removed from an AA flight, following a dispute with a gate agent. Among those who complained was an African-American man who had to give up his purchased seat on a flight from Washington, DC to Raleigh-Durham after he responded to insulting comments from two white passengers.

In another incident, an African-American woman and a white woman booked two seats in first class, but the black woman had her ticket switched to coach while her white companion rode in first class.

On a flight bound for New York from Miami, the pilot directed an African-American woman to be removed when she complained to a gate agent about having her seating assignment changed without her consent.

Finally, an African-American woman and her infant child were removed from a flight from Atlanta to New York City when she asked for her stroller to be retrieved from checked baggage before she disembarked.

It is not the first time the NAACP has issued travel advisories “when conditions on the ground pose a substantial risk of harm to black Americans.” Earlier this year, the organization issued its first advisory for the entire state of Missouri after a bill was passed there affecting employee protections against workplace discrimination.

“All travelers must be guaranteed the right to travel from fear of threat, violence or harm,” stated Derrick Johnson, president and CEO of the NAACP. “We expect an audience with the leadership of American Airlines to air these grievances and to spur action. Until these and other concerns are addressed, this national travel advisory will stand.” 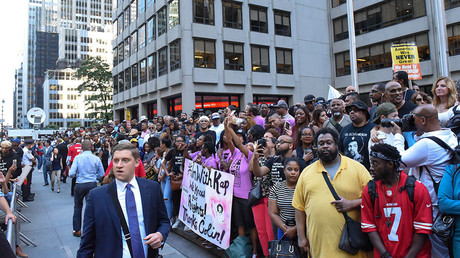 AA, the world’s largest airline, said it was disappointed to hear about the travel advisory, and pledged that its officials would meet with NAACP representatives at the carrier’s Fort Worth, Texas headquarters.

“We are disappointed to hear about this travel advisory as our team members – a diverse community of gate agents, pilots and flight attendants – are proud to serve customers of all backgrounds,” spokeswoman Shannon Gilson said in a statement. “With that we understand there is more to do. …We are committed to having a meaningful dialogue with our airline and are ready to both listen and engage.”

Travel advisories are traditionally issued ahead of severe weather events or political disruptions. While civil rights advisories are unusual, they have been issued in the past. The American Civil Liberties Union (ACLU) warned against traveling to Arizona in 2010 and to Texas this year, after state laws were passed allowing law enforcement officers to question a person’s immigration status.