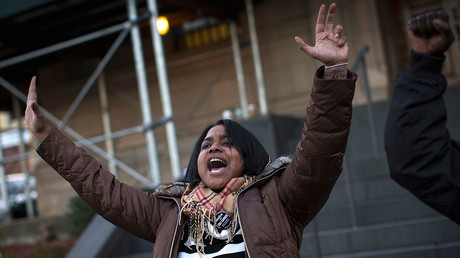 Erica Garner, who became a prominent civil rights activist after her father’s death in a police chokehold, has been declared brain-dead with no chance of recovery. Garner, 27, was in a coma after a “massive” heart attack.

“She’s not gone, she’s brain dead,” her mother Esaw Snipes told the New York Daily News on Thursday. “Physically she is still with us.”

Update: Cat scan shows Erica suffered major brain damage from a lack of oxygen while in cardiac arrest. Please continue to pray hard for Erica and pray for her family and kids just as much.

An asthma attack on Saturday reportedly stressed Garner’s enlarged heart and triggered cardiac arrest. A CAT scan on Wednesday revealed that she had suffered brain damage “from lack of oxygen” during the heart attack.

Her father, Eric Garner, died in July 2014 after being placed in a chokehold by a New York Police Department officer. His last words were reportedly “I can’t breathe.” His death pushed Erica into activism against police brutality and helped propel the Black Lives Matter movement to national prominence.

“I just left the hospital and it’s not looking good,” Erica’s sister, Emerald Snipes, posted on Facebook on Sunday. “I pray she makes it; she has two little ones to live for.”

Garner gave birth to her second child, a son, in August. She named him Eric, after her late father. It was during the pregnancy that she was diagnosed with an enlarged heart. She suffered her first heart attack shortly after the delivery. Garner also has an 8-year-old daughter.

The family has made clear they don’t consider Garner gone just yet. They rebuked New York City Council member Jumaane Williams on Thursday morning, after he tweeted a “rest in peace” message on Wednesday night. Williams has since apologized and deleted the tweet.

Following her father’s death, Garner led marches and protests in New York and elsewhere, drawing attention to the plight of African-Americans who’ve been attacked police. In April 2015, she attended the funeral of Freddie Gray in Baltimore, Maryland.

In July that year, the Garner family accepted a $5.9 million settlement from New York City, but maintained that true justice would only come when the officer involved, Daniel Pantaleo, was charged. No charges were ever filed, however. The police union called the settlement “obscene.”

Erica Garner continued her activism. In 2016, she endorsed the bid of Vermont Senator Bernie Sanders to become the Democratic presidential candidate. Hillary Clinton’s campaign staff complained of an “Erica Garner problem” in internal emails published by WikiLeaks in October last year. After the emails’ publication, Garner slammed the Clinton campaign, saying “These people will co-opt anything to push their agenda.”

As the news of Garner’s condition spread, journalists and activists all over the world chimed in with messages of tribute and support for the family.

“Erica vigorously sought justice for her father but remained true to her principles, opposing both Clinton and Trump to the end,” tweeted WikiLeaks co-founder Julian Assange.