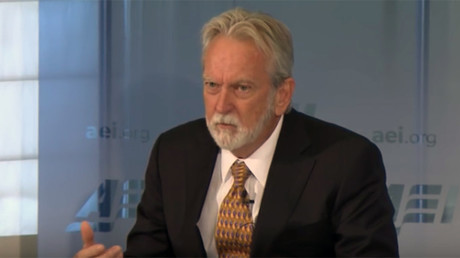 James Mitchell, one of two psychologists behind the CIA’s enhanced interrogation program used under President George W. Bush, defended torture by saying the word has lost its meaning.

Mitchell, who is currently being sued by those subjected to his torture methods, was speaking at conservative think tank the American Enterprise Institute to promote his new book ‘Enhanced Interrogation – Inside the minds and motives of the Islamic terrorists trying to destroy America’ on Tuesday.

Mitchell attempted to downplay torture by comparing it to the term racism, equating the two as being overused and exaggerated.

“The word torture has become like the word racist,” he said. “It’s been used so many times it’s lost its meaning.”

James Mitchell, CIA torture architect: ‘Word torture has become like the word racist.’ “It’s been used so many times it’s lost its meaning.”

It’s hard to be both racist and pro torture in one simile. Mitchell’s lack of morality is almost surpassed by his verbal dexterity. https://t.co/xy9bg80Bn3

“If this political correctness continues, we’re going to be standing on a moral high ground looking down into a smoking hole that used to be Los Angeles,” he warned.

The former CIA interrogator’s comment caused many to express disgust and anger on social media.

@AliWatkins no James racist hasn’t lost its meaning and torture hasn’t either. Racist is racist. Torture is torture. Good try though.

People were confused by what he could have meant.

@AliWatkins This man is so stupid he doesn’t know what racist means? Or he’s so racist that he can no longer define it?

Mitchell said he only tortured top-level terror suspects during his time as an interrogator. Methods employed by the CIA included rectal feedings, stress positions and waterboarding.

Waterboarding is a method of torture where a victim is pinned down with a cloth over their face as water is poured over the cloth, simulating a drowning experience.

Some argued with his claim that the word torture had lost meaning, given its legal definition “enshrined in US and international law.”

Others simply mocked the psychologist.

Mitchell appeared on Fox News’ Hannity last week to discuss the merits of torture, and to promote his new book.

“I actually did all the waterboarding that was done by the CIA,” he told host Sean Hannity.

When asked if he thought it was an effective method, he said, “if legal, it could be.”

Mitchell was brought in by the CIA in 2002 to develop methods of torture, or enhanced interrogation, in the wake of 9/11.

He soon rose to be one of the top interrogators, practicing his ‘enhanced’ methods on terror suspects at CIA black sites.

The Senate Select Committee on Intelligence found the CIA’s detention and interrogation program to be brutal and ineffective. While its report remains classified, an executive summary was released.

Obama banned the use of torture in 2009, but on the campaign trail, Trump said he would bring back waterboarding. He has since walked that statement back, telling the New York Times he found his pick for secretary of defense General James Mattis’ view that other methods are more effective to be interesting.

“I’m not saying it changed my mind,” Trump said.

During his AEI appearance, Mitchell contradicted Trump’s claim about Mattis’s views, claiming they were taken out of context.

“Would you give up information that would get Americans killed if you were captured by ISIS or Al-Qaeda, for a Michelob and a pack of Winstons?” he said. “I don’t think so. It’s a sad thing to suggest that the general would do that.”