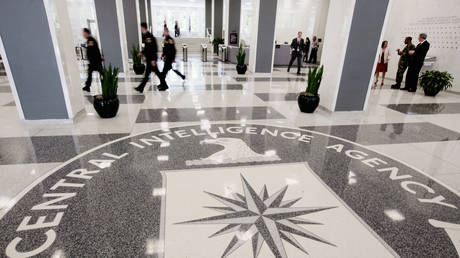 An apparent CIA poster appealing to Russian speakers to join US intelligence has been derided for failing to reconcile Russian and English grammar and mismatching fonts. The poster allegedly popped up in Washington, DC.

The poster was spotted by Reuters’ David Brunnstrom at Foggy Bottom station in Washington, which is home to many government agencies, including the State Department, the Department of the Interior, as well as George Washington University.

The poster bears the CIA emblem and a link to its official website in the bottom right corner, and appears to be a recruitment ad aimed at Russian-speaking Americans that comes with a twist: if you don’t know Russian, you’ll be unable to read it since it is written in a mix of the two languages.

Judging by the ad’s contents, the CIA is indeed in dire need of capable Russian speakers, as it includes a glaring mistake. Unless, of course, it was intentional and was meant as a trial – it is a spy agency ad, after all. Russian netizens, however, denied the US spooks the benefit of the doubt, and flocked to the comment section to point out the blunder.

The first part of the sentence, written in Russian, translates as: “Your mastery of foreign languages,” which should be followed by a singular verb according to the rules of both Russian and English grammar. However, the second line goes: “are [instead of ‘is’] vitally important to our national security.”

And for those willing to forgive the wrong verb form, there are two bonus levels to nitpick at: one, the CIA copywriters’ inability to reconcile their Cyrillic and Latin fonts; and two, the image of an Asian-looking man accompanying the banner.

The Twitterati were ready with their proof-reading skills and condescending smirks.

Shouldn’t it really be “is vitally important” though?

CIA has trouble bringing its English plural into agreement with its Russian singular. (Nor can it reconcile its Cyrillic and Latin fonts.)

The ad kinda proves the point, it’s not are, it’s is

While that particular poster might be a spoof, the CIA is known for headhunting Russian speakers. Last year, the agency advertised jobs for Russian speakers on Twitter, provoking a storm of interest among Russians – who don’t qualify for the job, since it’s reserved for US citizens.