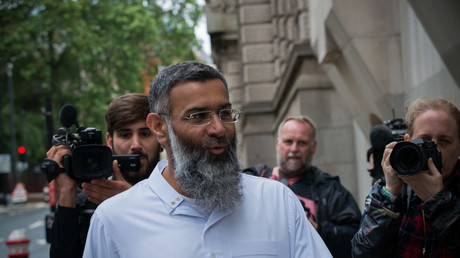 In a recording of comments made by Choudary after the meeting, which was obtained by The Sun, he says: “They were so strong in terms of their faith. They would imbibe in anyone a real kind of sense of total reliance in Allah.” He added that their contentment was “amazing.”

It remains unclear who recorded Choudary.

Both men are in prison following failed attempts to commit what would have been devastating terrorist attacks. Abdulla Ahmed Ali was imprisoned for 40 years after devising a plot to use liquid bombs on transatlantic flights in 2006. The plan led to liquids being temporarily banned on flights, followed by permanent restrictions.

Hussain Osman was also given 40 years for trying to blow up West London’s Shepherd’s Bush tube station three weeks after the 7/7 bombings in 2005.

Following Choudary’s release on probation last week, the preacher will now be subject to a large number of requirements as well as monitoring from the security services, at a reported cost of £2 million ($2.6 million) a year.

READ MORE: Sunday Times’ Liddle accused of ‘inciting violence’ after telling Islamists to ‘blow themselves up’

Conditions are thought to include limits on his movements, such as an evening curfew; the wearing of a GPS electronic tag; and a ban on visiting specific venues such as Regent’s Park Mosque in central London, where he used to worship.

Many imams of mosques who Choudary had wanted to visit upon his release have said the preacher would not be welcome. Others were in contact with authorities ahead of his release, requesting that he also be barred from their premises.

Choudary’s name has been added to a UN sanctions list, prohibiting him from traveling as well as imposing an asset freeze on him, and an ‘arms embargo.’

Choudary, one of Britain’s most high-profile supporters of Islamic extremism, came to prominence in the early 2000s as the UK joined the US’ so-called ‘war on terror.’ The preacher and his group of Muslim extremists, Al-Muhajiroun, toured the country delivering talks and protests targeting the government and promoting a ‘clash of civilizations’ narrative between Islam and the West.

The murderers of Lee Rigby, Michael Adebolajo and Michael Adebowale, as well as London Bridge attack ringleader Khuram Butt, were associated with Al-Muhajiroun, which is now banned in the UK and listed as a terrorist organization by the US State Department.