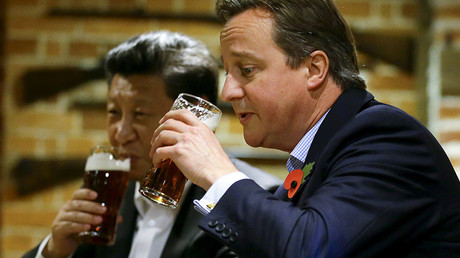 The Plough at Cadsden has become so famous in China that it is now a tourist attraction for Chinese visitors to the UK.

Located near Chequers, the prime minister’s official country residence, the rural tavern was bought by Chinese investment company SinoFortune, which plans to use it as a model for a chain of British pubs in China.

The state-backed enterprise usually pours money into infrastructure projects like roads, railways, airports, and power stations. After last year’s state visit, however, the firm contacted Christie & Co – a British pub and restaurant agent – and asked it to approach The Plough’s owners to see if they would sell.

Owner Steve Hollings agreed and is thought to have sold the pub for around £2 million.

“We are really pleased to have completed the sale of the Plough to SinoFortone Investment,” said Christie & Co director Neil Morgan, as quoted by the Morning Advertiser.

“The pub became famous in Chinese circles following the visit of President Xi Jinping, and it has become quite a tourist attraction for Chinese visitors since, who are keen to sample the classic British food and beer that the president tried,” he added.

Sinofortone’s managing director, Peter Zhang, said, “We are so excited about this new adventure.”

“The English pub concept is growing very fast in China and it’s the best way culturally to link people from different countries and build friendships,” Zhang was quoted in the China Daily as saying.

Exports of Green King IPA, the ale Xi was photographed drinking, have soared since his visit to the UK last year.

The Plough’s website describes it as “probably the most famous pub in England” and “the pub of choice of prime ministers for many decades.”