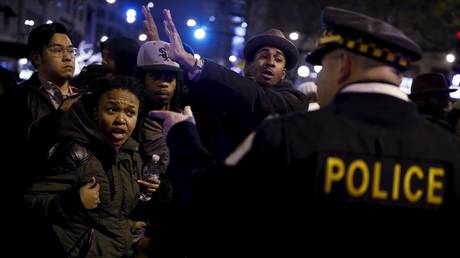 Officers accused of abuse have been put in charge of a Chicago police program designed to curb incidents of “racist police violence,” The Intercept has revealed, raising serious questions about the force’s efforts at reform.

According to documents obtained through a Freedom of Information Act, 16 of the 17 police officers who have contributed to the Chicago Police Department’s “implicit bias” training program since the start of 2017 have together racked up a total of 111 misconduct complaints.

The program, which aims to curtail racially-motivated misconduct within the force’s ranks, was adopted in response to a damning Department of Justice investigation launched after Chicago police killed 17-year-old Laquan McDonald and then tried to cover up the incident. The DOJ uncovered a pattern of serious civil rights violations, prompting the city’s police to take measures to regain the public’s trust.

Also on rt.com
Florida police defend punching of 14yo girl lying on ground during arrest (VIDEO)


The documents unearthed by The Intercept, however, have raised questions about whether the notorious police force is receiving the instruction that it apparently so desperately needs. For example, one officer who provided “procedural justice” training has faced seven accusations of misconduct targeted at black people since 2011.

Another officer involved in the program reportedly “stomped” a black man while he was lying on the ground, the FOIA documents revealed. Six other officers, The Intercept reported, have together been involved in at least ten civil rights lawsuits, with at least half of the cases ending in settlements or payments to the plaintiffs who alleged police abuse.

When reached for comment by the site, the Chicago Police Department insisted that the force has “aggressively marched forward on expanding the quantity and quality of in-service training available” for officers. “All allegations made against a Chicago Police Officer are taken seriously and thoroughly investigated,” the statement read.


RT reached out to the Chicago Police Department for comment on the Intercept report, but the force has not yet responded.

Allegations of systemic police abuse are not unique to Chicago, however. The police killing of an African-American teen, Trayvon Martin, in 2012 led to the Black Lives Matter movement, which continues to protest racial profiling and police brutality across the United States.