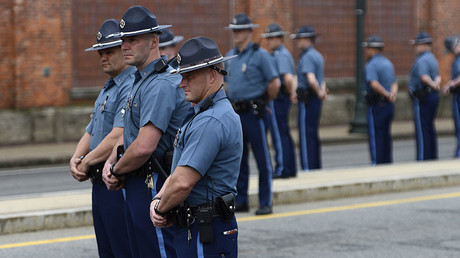 A gang of all-terrain vehicles and dirt bikers caused chaos on the streets of Boston Saturday. The group was eventually stopped by state troopers who shot one of the men in the foot.

The group of up to 30 riders on ATVs and off-road bikes were riding in a “reckless manner,” Massachusetts State Police said in a statement. Officers struggled to rein in the group as they sped through the streets, performing wheelies and swerving between cars.

“Police received numerous 911 calls reporting reckless operation by this group that was endangering the public.” police said. “Troopers observed the group traveling in an erratic and dangerous manner on Route 93 Southbound in Boston.”

State troopers and Boston police managed to get the better of the group by setting up a roadblock near Exit 18 of Interstate 93, Boston Herald reports. The bikers attempted to evade capture, with some abandoning their bikes and others trying to ride over the barriers dividing the interstate. Footage taken at the scene by one of the riders shows the chaos that ensued.

Five riders were arrested and around 20 bikes were seized. State police confirmed a man was shot in the foot by a state trooper as he was being arrested. He was taken to Boston Medical Center with a non-life threatening injury. A second rider who complained of pain was taken to hospital, as was a state trooper who suffered a knee injury.

The arrested riders are facing disorderly conduct charges, along with a number of vehicle offences. They are to be arraigned Monday. Police said both hospitalized men are expected to be arraigned as well.

State Police spokesman David Procopio told the Boston Globe the trooper who shot the rider will be placed on administrative leave for several days. State Police and the Suffolk County District Attorney’s Office will investigate the incident.